I commented in a recent blog ('And winter has barely started', 5 December) that this is the time of the year when lichens come into their own. That being the case, a sensible person would carry about their person a pocket knife and a container or two in order to collect samples. It goes without saying that I have not equipped myself properly.


Earlier today I went out for a bit of exercise - a walk of only two or three miles to chase away feelings of lethargy; I ought to have walked further but not only were conditions grey and chilly but a drizzly rain began to fall, dampening both my clothing and enthusiasm.

Along Yeomanry Way stands a small group of Common Lime trees. Their trunks, on the eastern side, were grey and lacking in interest but on a whim I strolled around the back as it were, with a vague memory of Boy Scout lore regarding the south-west aspect of trees. The contrast was astonishing. It may have been a suburban situation but the lichen flora was remarkably rich. Of course the species present were commonplace and the variety was limited but over considerable areas no bark was visible beneath the lichenous crusts.
One of the most abundant was Physcia aipolia. There are several rather similar species but nevertheless it is distinctive enough for me to be confident about this. It is known as a crustose species forming, as it does, a crust on suitable substrates, in this case tree bark. Also crustose and also favouring tree bark is Lecanora chlarotera but the fruits (ascocarps) tend to have a brown to buff disc with a pale margin. It is often to be seen in supermarket car parks!

Present too was Parmelia sulcata, a very common foliose lichen. Crustose lichens are almost inseparable from the substrate but with foliose species, as can be seen, the lobes of the thallus can be partially lifted and removed from, in this case, the bark.

Perhaps our most abundant lichen - almost a 'lichen weed' - is Xanthoria parietina, but we must exercise a little care, as X. aureola (more correctly X. ectaneoides) could be confused with it.
It is especially abundant on the twigs of elder and I found it several times during my walk but the species on the lime trees I am a little uneasy about. This close-up doesn't seem quite right - but am I looking for a problem that isn't really there? 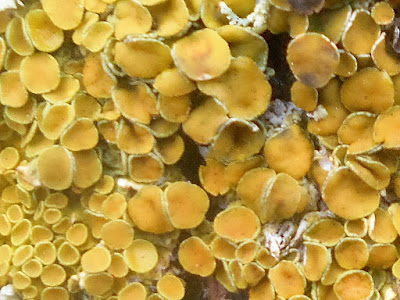 At least three other species were noted (and an expert would have found more) but for these I'll need to return and procure proper samples. Nevertheless I'll mention one more lichen. Psilolechia lucida is abundant even in towns, where large patches of it occur on damp walls.

It is easily overlooked when dry but seems to stand out in rainy conditions and looks, as the late Tom Chester put it, 'almost as if a small child with a large green stick of chalk has been on the rampage' (British Wildlife, Vol 8, No 3). (Tom's mention of  'a school child' reminds us that he was the Head Teacher of a Northamptonshire school.) I found it, not on the lime trees, but on a brick wall as I neared home - damp.