In Northampton, with time to kill, I decided to visit Delapre Abbey. This proved to be trickier than I had anticipated.
It is a fine old building but has been seriously neglected for decades. This situation is now being remedied but the whole building is currently surrounded by tall wooden boarding so I was completely unable to get a satisfactory photograph of the structure. Instead, carefully stepping through muddy patches, I made my way to the gardens at the rear.


In high summer these gardens are a fine sight but I suspected that there would be little to see in December: my suspicions proved correct. The only plant in flower consisted of a bedraggled clump of Liriope muscari. This distant relative of Asparagus is known by a number of names, none particularly flattering, and include Monkey Grass and Lilyturf. In fact this east Asian plant is named in honour of Liriope, a Greek woodland nymph who was the mother of Narcissus.

In all honesty it is not an exciting plant. Horticulturalists tend to refer to it, rather disparagingly, as a 'useful' plant; certainly it tolerates shade quite well. The specific name 'Muscari' refers of course to the genus Muscari, i.e. the Grape Hyacinths, but a close-up shows that the similarities are superficial. 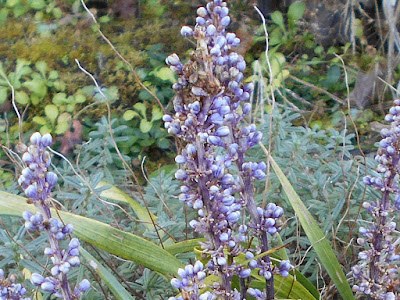 I strolled around for a few minutes in a rather desultory manner then, deciding that nothing more was to be seen, began my puddle-dodging journey back to my car. I was carefully watching where I placed my feet and had a surprise. All around were the very distinctive leaves of a Tulip Tree, with their lower lobes jutting out at right angles and the leaf tip oddly truncated.
The Latin name for this species is Liriodendron tulipifera, which brings about an odd coincidence, because in most gardening dictionaries it is directly followed by the aforementioned Liriope. I looked upwards. Where was the parent tree? In fact I was standing directly beneath it and, despite being leafless, the tree was unmistakeable.
It was a huge specimen with an oddly swollen base to the trunk. This species often attains great size and it is said that in its native North America the indigenous people would use the massive trunk for hollowed-out canoes. The 'Latin' name is really Greek, being based on the Greek words leirion, a lily and dendron, a tree. The flowers of this tree are, to my mind, magnificent and it deserves to be much more widely planted. It is related to the Magnolias in the ancient Magnoliaceae. The distribution of this family is curious and is surely a consequence - in part at least - of 'continental drift'. But that, as they say, is another story.
As I resumed my walk back to the car an odd-looking bird crossed overhead. It settled briefly in the branches of a nearby oak, pausing long enough for me to see that it was a Little Egret. I stealthily approached it in the hope of a photograph but it was easily spooked and flew off. I raised my camera in the vain hope of snatching a picture but had no luck. However the resultant picture reminded me that, as we approach the shortest day, the sun sinks early. It was only three p.m.