A potentially attractive walk exists from Borough Hill Farm, a mile or so to the east of Daventry, and entering the town through the Southbrook area. I resolved to give it a bash.


Chris, en route to Weedon, dropped me off beside the busy A45 and I set off, heading north along the road towards Borough Hill Farm. The weather conditions were not ideal; it was mild enough and windless, but the sky was uniformly grey and a light drizzle was falling. The top of the transmitter on Borough Hill was shrouded in cloud and the whole landscape was misty.

My walk took me over the course of the old railway track, the line once connecting Weedon and Leamington via Daventry and, although I could have accessed it, there seemed little point. Beside this track a couple of lakes exist but they are of recent construction and are not shown on my Ordnance Survey map.

Known as Newnham Grange Lakes they are designed for anglers but are surely very welcome and should prove a magnet for wildlife; as I approached a Grey Heron and a Cormorant took flight. On the other side of the road a splendid example of Pedunculate Oak, Quercus robur, stood. The acute angles on the branches and crooks showed just why this was so valuable for shipbuilding (but rubbish for wooden legs).
I plodded on and, just before reaching Borough Hill Farm, I turned west and left the road. Soon I was making my way up a fairly steep slope, the side of Borough Hill. The ground was clearly acid and, although none of the classic calcifuges such as Heather, Calluna vulgaris, were present, there were swathes of Bracken, Pteridium aquilinum, beside the track, some patches covering several hundred square metres. Like Gorse, Bracken does not demand acid soil but seems happier on it and is only occasionally found over lime.
The plant is generally a noxious agricultural weed but the individual fronds are undeniably attractive. The generic name of pteridium refers to the wing-like form of these fronds and comes from the Greek pteron, a wing. 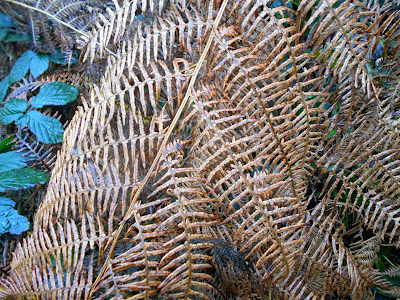 I looked in vain for 'little black puddings', the small, sausage-shaped galls caused by the fly, Dasineura pteridis, a species apparently apparently confined to bracken. I may make a return visit for this next summer. Progress was pleasing and I knew that as I rounded the hill Daventry would come into view. Except that it didn't; the path suddenly came to a halt with a thicket of brambles blocking the way.
I left the track and forced my way through woodland aiming to remain parallel to the intended route. It was slow progress but not without interest. There were dead trees to be negotiated - but the rain had increased to a steady and heavy drizzle.

Most impressive was a huge coppiced sycamore. The coppicing must have taken place at least fifty years ago and it is just possible to make out my glove, placed on the trunk for scale. It took about twenty paces to walk around this huge mass.
I struggled on for another hundred yards or so but it became obvious that no further progress was possible and I about-turned and retraced my steps. 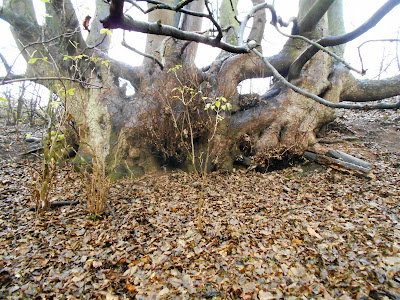 The heavy drizzle gradually abated and I was soon on the farm track and re-crossing the bridge over the old railway. Only one other thing is worth mentioning. I stepped aside to allow a 4x4 to pass and noticed at the roadside an oak leaf. It was clearly one of the North American species - they are very distinctive - and I brought it home for keying-out. The tufts of brown hairs in the axils of the leaf-veins were still clearly to be seen, showing it to be Quercus palustris, known in the U.S.A. as Common Sallow.(In Northamptonshire Common Sallow is an alternative name for Goat Willow, Salix caprea.) I had a good look around but failed to find the tree from whence the leaf had fallen. Odd!