Oh dear, I'm afraid this is one of those blogs which is little more than a memo. A walk home from Daventry revealed a number of pest diseases and disorders of plants which are of little or no general interest but I couldn't resist making a photographic record.


My walk commenced in the churchyard of the Holy Cross, a sad scene of neglected gravestones, litter and plastic flowers. And questions too. 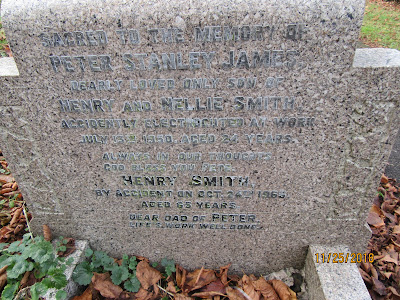 Who was he? Where did he work? Who was at fault? Did he leave a widow? No doubt newspaper archives would be helpful and perhaps someday...


The churchyard could, with appropriate management, be a haven for wildlife but today revealed little. A leaf on a stinging nettle bore a blemish, a mine caused by the fly Agromyza anthricina, but not even the most enthusiastic naturalist could get excited about this.

Much the same could be said with regard to the holly leaves mined by another fly, Phytomyza ilicis. On one tree almost every leaf seemed to be affected. A poor photo but, in mitigation, I've borrowed Chris' camera and I'm not used to it.

On then to the recreation ground behind the police station. Birch trees are often greatly afflicted by a range of problems, some malignant and some of little consequence.


Witches' Brooms often develop on birch trees. For decades they were often vaguely ascribed to 'physiological disorders' but research has shown that the usual culprit is a fungus, Taphrina betulina. A row of about six trees stands along one edge of the area but, strangely, only one tree is affected.

Another of the Birches bore a huge burr on its trunk. This problem has often been put down to 'stress' but I am far from convinced. Bacterial attack by an Agrobacter species is an alternative - and more plausible - explanation. Some burrs are greatly valued by wood turners but birch is too soft for many uses.

Between the trees pyracantha shrubs had been planted. All over Britain shrubs in this genus, together with hawthorns and many of their relatives are being affected by the Firethorn Leafminer, Phyllonorycter leucographella, even though this moth arrived in this country as recently as 1989.

The mine forms a thin membrane, through which the larva can frequently be seen. Like the Harlequin Ladybird, it is here to stay and it appears that little can be done about it. But is it a problem? I don't regard it as such.