... and still the flowers bloom.

In October we had a couple of distinctly chilly nights. Ice formed on our 'pond' (just a half-barrel really) and when I broke it off and dropped it on to the flagstones it lay there in shattered fragments for all the following day. With these low temperatures it might be thought that all flowers would have given up, but not a bit of it.


Our Trumpet Honeysuckle, Lonicera sempervirens, is on a south facing fence and is thriving. 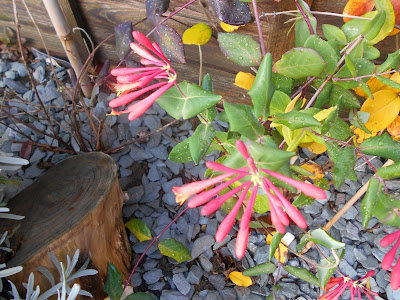 A native of the eastern U.S.A. its long, tubular flowers are pollinated by Ruby-throated Hummingbirds on their migrations. They overwinter in Mexico and then spend the summer in Maine, Massachusetts and so on. Unfortunately these birds are rarely seen in Daventry but some moths may pay the flowers a call.


Far more mundane is Aubretia, Aubrieta deltoidea, but it is utterly reliable and is seeding itself in various crevices around both our front and back gardens. In fact this native of South-east Europe has become naturalised on suitable walls and rocky banks as far north as Sutherland. 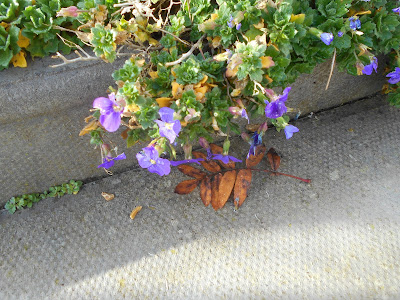 According to 'the books' this is a spring-flowering plant but fortunately hasn't read the books and is ignorant of this.

Schizostylis coccinea, from South Africa is only a 'half-hardy perennial' but again has clearly nor studied the literature and is thriving even here in Daventry - not really known for its mild climate. Hopefully no-one will enlighten this plant regarding its true status.

About three years ago I planted a hybrid foxglove in one of our raised beds. Up came this penstemon! My immediate and foolish thought was that it was indeed the aforementioned foxglove, not giving it more than a cursory glance.

Anyway, it is very welcome and the rather small clump will hopefully increase steadily. It is often wrongly spelt pentstemon, an understandable mistake for the first part of the name is derived from the Greek pente, five, alluding to its five stamens.

Less colourful but, to my mind, more interesting, is our Strawberry Tree. Its ivory flowers are, in shape, not unlike those of the cranberry or Pieris japonica and this small tree is obviously a member of the Heather Family. Quite illogically I still feel surprised by this. It is a member of Britain's Lusitanian flora but, as I blogged about this some time ago, (11 November, 2014) I won't go further into the subject.

To complete this sextet of plants comes Pale Corydalis, Pseudofumaria alba. It was once known as Fumaria alba, hence the generic name, but there are minor differences which I will not go further into this subject either.
Will I regret introducing it into the garden? Certainly seedlings are popping up in several places but weeding them out should not become a problem. Its close relative, P. lutea, with its cheerful golden-yellow flowers is, like aubretia, well naturalised in suitable places throughout Britain and perhaps P. alba will eventually attain the same status but so far escapes into the wild have only been on a small scale.


These flowers surely won't be with us for much longer but the catkins of the Garrya are lengthening and beyond that there may still be a surprise or two.