With a bright sun shining from a clear blue sky I set off to Foxhill Farm. My objective was a field (7077) which, on the face of it looked very untidy. In fact the owner, Matt Moser, has sown the field with plants which have been allowed to go to seed, yielding plentiful provender for birds. Corn Bunting, Yellowhammer and Skylarks are among many species which could benefit from this bounty.


Being unsprayed, and with a splendid variety of 'weeds' the field was likely to be rich in insect life too. I found over a couple of hours a good assortment of bugs, by which I mean true bugs rather than the conglomeration of creatures including bacteria ('hospital bugs') grouped under this unsatisfactory term.


Perhaps the largest was a Gorse Shieldbug, Piezodorus lituratus, an unsurprising find given that there is lots of gorse on Foxhill Farm. Although not very eye-catching I regard it, with its olive-green coloration, as a handsome insect.

Present in considerable numbers were specimens of the Parent Bug, Elasmucha grisea. Most had taken on dark coloration in preparation for the oncoming winter, but the black and white banded antennae make the species easily recognisable. The species is particularly associated with birch trees and there were plenty within a hundred yards or so.

The last shield bug was a surprise. The Turtle Bug, Podops inuncta, (sometime called Podops inunctus) is moderately common across the south and east of England. The name Podops comes from podos = foot and ops, eye. (Yes, it doesn't make obvious sense.) As for inunctus, this means 'anointed' and refers to the fact that in certain lights the back if the insect appears oiled. 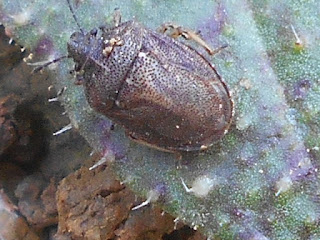 
I suspect that, when disturbed, the bug may drop to the ground where it blends in with the earth very well indeed. I have only found the insect once before in the county and this cryptic coloration may explain why.

The species is a bit of a mystery inasmuch as its feeding habits are not known. I swept it from a clump of assorted plants so I can offer no help in this matter.

At this late date I saw no butterflies on the wing and, although I took dozens of flies and beetles, they will have to wait for microscopic examination later.