Last night was distinctly chilly and I suspect we weren't far from the first frost of the autumn (there was quite a heavy frost in Byfield). Even so, the morning was blessed with bright sunshine so I strode out through grass heavy with dew to visit our local pocket park. As I have said in previous blogs, it is no longer an officially designated pocket park, but the signage remains.

A few weeks ago the park's only pond was choked with Yellow Flag, Iris pseudacorus, and in that condition it was no longer of any use for breeding frogs and toads. Today I was delighted to find that a group has cleared it out. The water, which someone had apparently polluted with a paraffin-like chemical, has also been drained. The material, including a lawnmower, had been bagged up and the council, ever ready to do its bit and encourage voluntary efforts, had refused to take it away, deeming it 'unsuitable'. Much of this information I gleaned from a passer-by but I couldn't find out just who had organised it as I'd have been delighted to help.
A lawnmower had been hauled out of the mud together with other unsavoury items and, as there is no obvious source of water nearby, it is hoped that rain will do the job of refilling it.
A moderately large crab apple in the middle of the area is covered with fruit. It is probably the variety 'Golden Hornet' or something very similar and the softening fruit will be a welcome source of food for thrushes, jays, mice and so on.

There was little out of the ordinary to note but that does not mean that commonplace species lack interest. An old, decaying tree stump was sporting a lovely clump of Turkey-tail, Trametes versicolor.
﻿

This fungus is extremely common in this situation and plays a crucial role in breaking down the tissues of the wood and recycling its nutrients. It may lack brilliant colour but its subtle layering of brown, grey and cream more than make up for it. 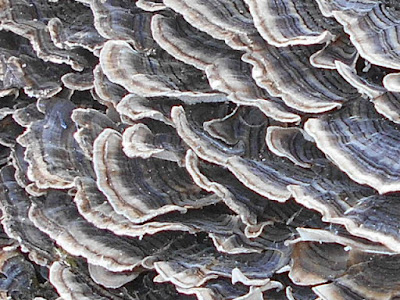 A Brown-lipped Snail, Cepaea nemoralis, was working towards its Duke of Edinburgh  Award by scaling a tree. This clearly involved a competitive element as other snails were climbing similar trees nearby. As I say, commonplace but interesting - or at least, I think so.