November the First - it must be Delapre Abbey

Delapre Abbey lies on the southern edge of Northampton proper, betwixt the town and Hardingstone. Less than ten years ago the buildings, once the Abbey of St Mary de la Pre, were in a dilapidated state, but a hefty Lottery Fund grant in 2013 has allowed a large-scale restoration to begin. When I paid a visit earlier today I found that a huge amount of progress had been made but I still had to pick my way through wheelbarrows, excavators (backhoes) and the like.

All very interesting, but my target was the area to the rear, where a shrubbery, mature trees and a walled garden would hopefully provide interesting glimpses of wildlife. A very large specimen of a Tulip Tree, Liriodendron tulipifera, was an important feature but as I have already written about this (Liriope and Liriodendron, 7 December, 2016) I will move on.
What I took to be a nice example of Cercidiphyllum japonicum stood in the walled garden so I strolled over for a closer look. As I got nearer I spotted a cluster of tell-tale pods on the branches. It was a Judas Tree, Cercis siliquastrum; the two species have almost identical foliage despite being in different families and in fact Cercidiphyllum comes from the Greek kerkis, a Judas Tree and phyllon, a leaf.

Most plants within the walled garden had ceased flowering with the heads of a Globe Thistle, Echinops bannaticus (nearly always listed in plant catalogues as Echinops ritro) being an exception. With few flowers of note I turned to other botanical features.
﻿

A Hart's-tongue Fern, Asplenium scolopendrium, showed clearly the elongated lines of sori that give this plant its specific name, skolopendra being Greek for a long-legged centipede, and clearly alluding to these brown lines. George Claridge Druce, writing in 1930, described it as 'local and decreasing' [Druce, 1930] but I find it regularly and it appears to be widespread. In older books it is called Phyllitis scolopendrium.

Liquidambar styraciflua is a member of the rather small Altingiaceae family, confined to warmer parts of the northern hemisphere. With its palmate leaves it  looks rather like an Acer but is unrelated.

For bright autumn colour it is almost unsurpassed but this seems to be at its best when the Sweet Gum - to use its common name - is grown on moderately acid soil.
Speaking of acid soil, the grounds of Delapre Abbey have quite a good display of Rhododendron species, plants which, with a few rare exceptions, like acid conditions. When examining the foliage of a rhododendron I was delighted to find many specimens of the brilliantly coloured Rhododendron Leafhopper, Graphocephala fennahi. It is a North American cicadellid bug which arrived in Britain in the 1930's and is one of only a very few insects which depend upon Rhododendrons, feeding on the sap.
I was very pleased with this discovery and my day was complete when, a couple of minutes later, I took an equally colourful spider.
My e-mail address is diaea@yahoo.co.uk, suggesting that I hold Diaea in high esteem. So when I found a male of the only British member of the genus, Diaea dorsata, in my sweep-net I was particularly pleased. The female of the species is unremarkable and perhaps easily overlooked. Not so the male which, apart from the dorsal surface of the abdomen, is of a lovely emerald green. It is moderately common, most often found on evergreen trees such as yew, and shrubs such as Cherry Laurel, from which I took this specimen. 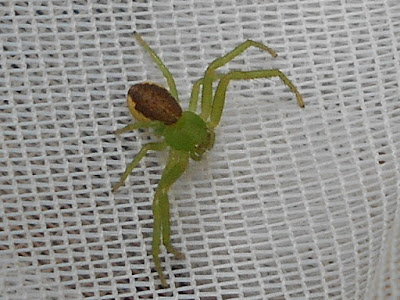 It is depicted on the dust jacket of Volume 1 of Mike Roberts' superb Spiders of Great Britain and Ireland. 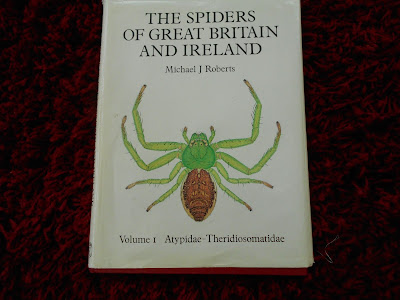 As I say, my day was complete.