The church of St Nicholas, Eydon

Here I go again, poking around yet another church. Today it was the very attractive church of St Nicholas, Eydon. Before I go further I should mention that the village name is pronounced Eden, and as if to make this absolutely clear, there is a farm nearby called East of Eydon Farm. As in:

So Cain went out from the Lord's presence and lived in the land of
Nod, which is east of Eden.


Right, that's sorted!
The church, like so many in the area, is Grade II listed, even though in general architectural terms, it is not at all unusual and the devil is in the detail. The local area was once well known for its quarries, with some of the finest stone apparently coming from a pit near Eydon owned by one William Tew. The whole of the church is constructed using Eydon stone which, according to Diana Sutherland is 'very ferruginous, with sand grains set in a matrix of strong limonite'. [Sutherland 2003] 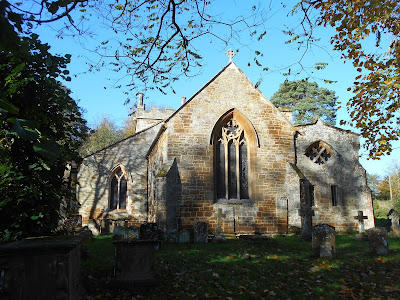 The stained glass windows always attract attention - of course, they are meant to - and most portrayed a typical array of biblical scenes. Two of the windows in St Nicholas' Church were nevertheless unusual, displaying heraldic material in the form of coats-of-arms.
Window 1 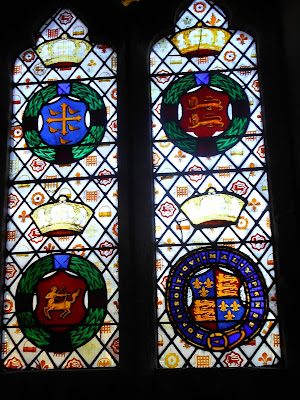 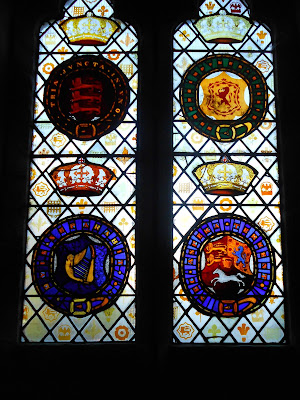 Of course my real interest lay in the churchyard and its wildlife. An important and imposing feature was not a native species but a Tulip Tree, Liriodendron tulipifera, a member of the Magnolia Family from the U.S.A. Not for the first time my attention was drawn to its presence by noticing its leaves on the ground. These four-lobed structures are very distinctive and the shape is surely almost unique. Tulip Trees can attain huge dimensions, sometimes reaching a height of 45 metres. This churchyard specimen is a fine tree but has a long way yet to go. Incidentally the species is prized for its timber. 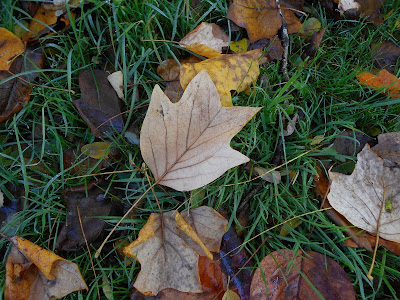 There was a fine Silver Birch present and a lovely Scots Pine, Pinus sylvestris, whose lofty branches created a lovely tracery pattern against the steel-blue autumn sky. 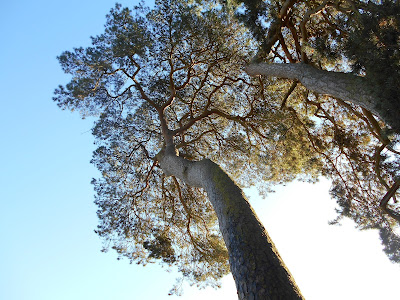 A nearby wall provided a home for a thriving patch of House-leek, Sempervivum tectorum. It is not a native to this country but is long-established, having been first recorded in 1629 and with the first Northamptonshire record being from Charwelton in 1813. It is known from walls and roof-tops (tectorum - of roofs) over most of Europe but seems to be unknown as a genuinely wild plant. Its tendency to be grown above doors may be behind one of its old names of 'Welcome home husband, however drunk you be' [Clapham et al,1962]. According to Richard Mabey House-leeks were originally grown on roofs as magical protection against lightning, especially on thatched houses, which were very prone to fire. [Mabey, 1996] Other names include 'Jupiter's Eye' and 'Bullock's Beard'. 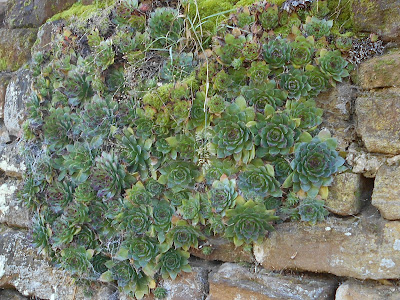 I examined a Lawson's Cypress and was pleased to find a specimen of the Juniper Shieldbug, Cyphostethus tristriatus, among the cones; pleased because it is a new record for the area but also smugly pleased because the coloration of this insect make it difficult to spot. 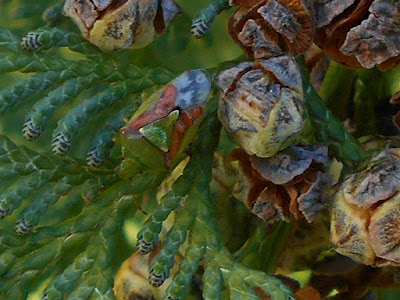 The village may merit a return visit in six months time.