Yesterday was the sort of day for which the word 'dank' was coined. There was no rain but the grass, wet from the previous day, failed to dry out and the sun had taken the day off. I found myself in Byfield and, putting misplaced optimism before common sense, I took a morning stroll down to the pocket park for a shufti*.
I set off from the Village Hall, passing under the three Turkey Oaks, Quercus cerris. I reached up to pull down a branch for closer inspection and was rewarded with a shower of water drops down the back of my neck - all for a look at the acorns. Each acorn sits in a cupule made shaggy by downward-pointing scales.

Turkey Oaks are handsome trees but regenerate so successfully that they have become a troublesome weed in places such as the New Forest and on species-rich limestone grassland in the Cotswolds. The timber is generally regarded as inferior to our two native species
I pressed on, noting in passing that the galls of Pemphigus spyrothecae on the Lombardy Poplars had turned cherry-red. The aphids responsible for the gall have already started to emerge and will continue to do so over the next few weeks.

Insects in general were scarce and in fact I recorded only one. Sargus bipunctatus is one of the Soldier Flies and most have appropriately military-sounding names. This species is known as the Twin-spot Centurion and is quite a handsome fly - if it can be persuaded to spread its wings to reveal the golden-bronze abdomen.

Ivy is now fully in flower and I would normally have expected it to be playing host to a plethora of visitors including honey bees but today was just a bit on the chilly side. Furthermore heavy rain can dilute nectar to point where it is not worth collecting. To cap it all, the honey produced from ivy flowers is said to have a rather unpleasant flavour. It is not widely realised that we have two species of ivy in Britain: our common species is Hedera helix, but Hedera hibernica also occurs, being more frequent in the west of the country. The latter has hitherto been regarded as just a sub-species but is now more widely accepted as a true species. 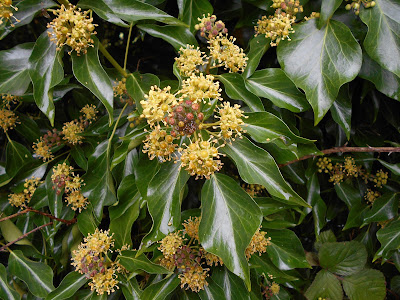 Ivy was once believed to be an antidote to hangovers and the timber was sometimes used to make wine glasses, believing that these would overcome the effects of over-indulgence.
John Clare gave advice on ivy, writing: 'hasten to the woods to get ivy branches with their chocolat [sic] berries which our parents used to color [sic] with whiting & the bluebag sticking the branches behind the pictures on the walls.' [Quoted in Flora Britannica by Richard Mabey.]

The plant belongs to the Araliaceae, a largely tropical and sub-tropical family many of which are lianas. Some, such as Schefflera, are popular house plants.


Slim pickings really, but I returned to the Village Hall and consoled myself with the thought that I'd had plenty of fresh air and a spot of exercise.


*  shufti  An Arabic word meaning 'look', commonly used by ex-servicemen who have served in the Middle East
Posted by Tony White at 07:17