For some time I have been intending to visit Ashby St Ledgers and take a look at the church. Today I finally got around to it and it turned out to be a trip of considerable interest.
The village is extremely attractive and I failed to see a single ugly building. The church is doubtless of great interest to the enthusiast but to me it just seemed typical of the area: pleasant but, externally, with nothing to get excited about.

It is dedicated to a French Bishop, Leodegarius (Ledger) and to St Mary and dates back to pre-Norman times, although the earliest parts of the present church date from the 1100's [Ref 1]. Attractive though the church may be, the churchyard rather lacks interest in terms of flora and is no longer used as a graveyard so the habitats that tombstones and memorials often bring are absent. 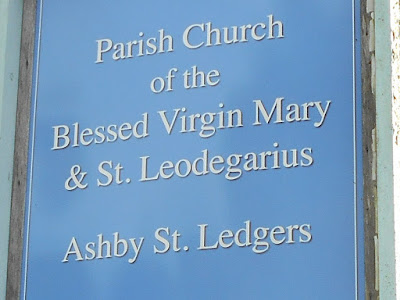 The main compensations were a large bank of ivy plus the views obtained of the Manor House. The latter is famous for being the location at which the Gunpowder Plot was hatched. Guido (Guy) Fawkes, Robert Catesby and others met in the Gatehouse of the manor in 1605. The rest, as the say, is history. Like the church the manor is built of Marlstone Rock, described as 'a warm brown ferruginous limestone with a seams of dark limonite...' [Ref 2] and there are outcrops of this rock barely a kilometre away.

The ivy was in flower and being visited by a multitude of insects. I spent most of my time at this point recording wasps, hoverflies, greenbottles and blowflies. A hornet called in briefly but would not deign to be photographed, unlike a Red Admiral butterfly almost flaunting itself in front of the camera.

The ivy was scrambling up a wall, on top of which grew a fern which I took to be Common Polypody, Polypodium vulgare, its sori bright orange-yellow. It was these rather large, vivid ochreous structures which gave me pause for thought and a little research revealed the following under the description of Polypodium interjectum: 'Rare. Occurs in a few places mainly on walls...A few new sites have recently been discovered [including] Ashby St Ledgers...' [Ref 3]. So, I have little doubt that I was looking at this unusual species, known as Intermediate Polypody.﻿

The only other point of interest for me was an oak tree in a corner of the churchyard. It was quite a young tree, perhaps three metres tall, and yet it was already hosting the galls of at least four wasp species: Andricus quercuscalicis, Andricus kollari,  Neuroterus quercusbaccarum and Andricus numismalis - known respectively as the Knopper Gall, the Oak Marble Gall, the Common Spangle Gall and the Silk Button Gall.
What will this tree be burdened with twenty years hence - or indeed what would I find on giving the tree a more careful examination?

Now to take a close look at the insects I found.


Among the galls on the oak tree I had hoped to find an example of the Ramshorn Gall, again caused by a wasp, Andricus aries. However the very next day, no more that 200 metres from home, I found several specimens of this very distinctive and appropriately-named structure.


3. Gent, G and R. Wilson (2012) The Flora of Northamptonshire and the Soke of  Peterborough.  Robert Wilson Designs