Another visit to Borough Hill

Borough Hill, to the immediate east of Daventry, dominates the surrounding landscape and it is not surprising that an Iron Age hill fort existed here. What is surprising is that remains of two of these forts have been unearthed. That same elevated position also made it ideal for the siting of a BBC transmitting station in 1925.
A few traces of these early installations remain but yesterday my daughter Jacqui accompanied Chris and me for a straightforward walk. Bing, Jacqui's newly-acquired puppy, helped with any sniffing problems.
It was late in the season for much of a floral display on this acid grassland, but Ladies Bedstraw, Galium verum, with its rather straggling, golden-yellow, honey-scented flowers was still plentiful. It was once gathered and used for stuffing bedding. It would eventually be burned and it is suspected that fleas and bed-bugs disliked the experience. The species is a food plant, along with species of Willow Herb, for caterpillars of the Elephant Hawk Moth.

Yellow is clearly the fashionable colour this season and among the grass were many specimens of Hawk's-beards. These, along with Hawkbits and Cat's-ears, can be tricky but in fact the species present in some quantity was the Beaked Hawk's-beard, Crepis vesicaria.

It is easy to recognise for the outer 'petals' are quite distinctive with their orange-red outer stripes and these can be seen even in a poor photograph.
There are usually a few yellow flowers too on gorse. It grows well on Borough Hill but yesterday its flowers were scarce. What was present however was a specimen of the Gorse Shieldbug, Piezodorus lituratus.
It was quite a dark example and it is clearly taking on the brown coloration which will see it through the winter. Although it is most likely to be seen on gorse it may also be seen on broom and, occasionally, laburnum.
Bordering the hill at the north and north-east margins are some fine trees: Sweet Chestnut, Sycamore and Larch are present but none of the trees is a native to Britain. All three are however native to the European mainland and have become well naturalised in some areas.
Larch is unusual among conifers in being deciduous in habit. It is, to my mind, a very graceful tree and its small cones may persist for several years. Japanese Larch is widely planted but those at Borough Hill were European Larches, Larix decidua.

The needles of the larch were still intact but, despite the glorious weather, foliage elsewhere was showing the onset of autumn.
A hawthorn bush had assumed a lovely pinkish colour and, although leaves were yet to fall, that stage was clearly imminent. 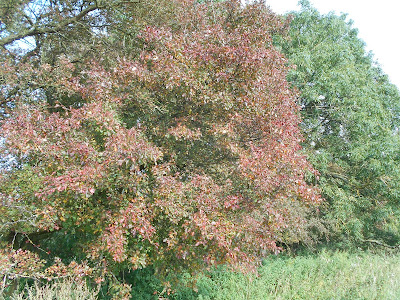 A closer look at some of the leaves showed them to be more of a copper-red and the shape of those in the second picture suggested the shrub was Common Hawthorn, Crataegus monogyna. 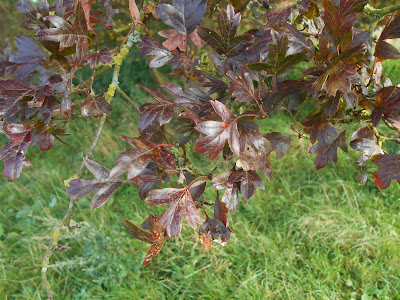 Well, That was yesterday but today is today and the rain is again pouring down. We were lucky on our walk because it has been a pretty miserable September so far.