In yesterday's blog I spoke of my surprise at finding a specimen of the tree Koelreuteria paniculata in a Daventry garden. Today brought a similarly unexpected sight.
In the heart of Daventry, tucked unobtrusively off Golding Close, is the rectory, occupied by the Rector of Holy Cross Church. As I passed it in the early afternoon I happened to glance upwards and saw some remarkable foliage borne by a tree. The leaves were huge, and at first I took it for a Catalpa (Catalpa bignonioides, The Indian Bean Tree) but these leaves were even larger, each being almost a foot across. I looked for the fruit which should have been like bunches of pencil-thin French beans but at first saw nothing.  Then I saw the actual fruit and the penny dropped. 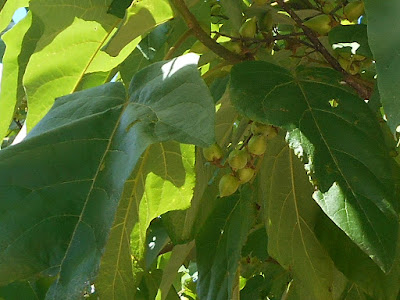 It was a Foxglove Tree, Paulownia tomentosa. This really beautiful Chinese tree is indeed a member of the Foxglove family, Scrophulariaceae, and its foxglove-shaped flowers are of a lovely purple colour, sometimes described as heliotrope.
William Stearn's book, A Gardeners Dictionary of Plant Names, informs me that the genus was named for Princess Anna Paulowna, daughter of Czar Paul I of Russia. Lucky girl! Around next May, barring a late frost, it should be in full bloom; I must visit it and pay homage.
A matter of a few paces away buddleias were in bloom and were attracting a few butterflies. 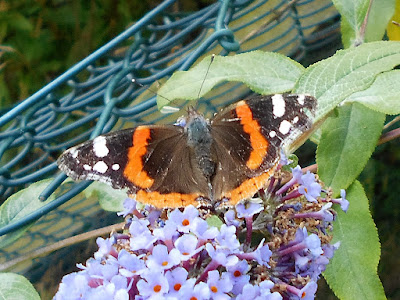 A slightly washed-out specimen of the Red Admiral posed nicely for a picture but brightly coloured specimens refused to co-operate, coyly keeping their wings closed but coquettishly offering a glimpse now and then. 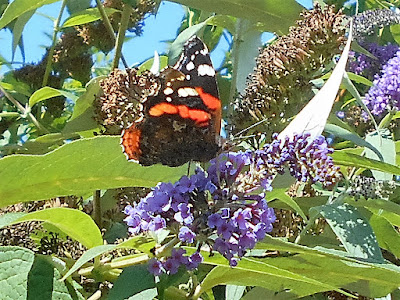 Peacocks were a washout being even less helpful and a disgrace to their species! I consoled myself with a smart specimen of a male hoverfly, Myathropa florea, as it refuelled at a nearby hogweed umbel. 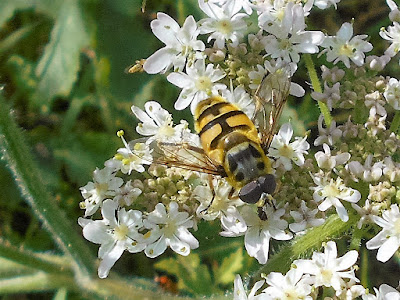