All allotment holders will, from time to time, come across a surprise. Sometimes it is an insect, such as the Hornet Hoverfly I saw on by runner beans a few days ago, or a brilliantly coloured Asparagus Beetle, an insect I last saw on the allotments at Byfield. But because the allotmenteer's main business is with plants, it is likely that oddities from the plant world will be the most often noted.
The Cockspur Grass, Echinochloa crus-galli, may turn up from time to time, and a specimen was growing on a plot adjacent to ours.
It was sprawling in an awkward manner so I brought home a sample for a more satisfactory picture. Although this plant, found widely across the world in tropical and sub-tropical regions, is only an annual it can reach a metre or more in a season.
If it can be persuaded to grow upright it is a rather handsome plant and perhaps merits a place in the garden. People who regularly top-up their bird-feeders may be familiar with Cockspur Grass and this allotment specimen almost certainly arrived in bird seed.
Rather off-topic but still on the subject of grasses a millet plant has cropped up in our front garden.
Several grasses are known as millet but this species is Panicum miliaceum.
It is the species most likely to be encountered and unsurprisingly is known as Common Millet. Perhaps I should have grubbed it out but it is such a graceful plant and, being an annual, will disappear later in the year. 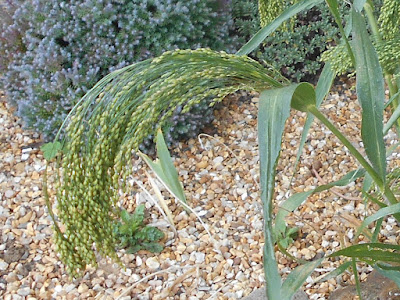 Back to the allotment. Also on a nearby plot was Black Nightshade, Solanum nigrum. It is closely related to the potato, Solanum tuberosum and is a very common weed. I only mention it because the plants were there in such abundance.


The flowers and fruits make its relationship to tomatoes and potatoes very obvious. The fruits are, if poisonous, only very mildly so and they appear to have been eaten in some countries during hard times.


I am hoping that it carries no diseases or pests that might transfer to my crops although one leaf carried a suspicious-looking cluster of eggs.


On several plots, and from a completely different family, the Oxalidaceae, comes Procumbent Yellow-sorrel, Oxalis corniculata. It is pretty plant with distinctive leaves suffused with red. Its flowers are pretty too, and if this all seems too good to be true, it is...

It was introduced to Britain in about 1656 but its origins are obscure for it is found in many warm regions of the world. By 1770 it was reported in the wild, presumably having escaped from gardens, and is now a pernicious weed, cursed by many a gardener. Its leaves may be sprinkled on salads - apparently - and the oxalic acid content gives them a pleasantly sharp flavour.
I was surprised to find one abandoned plot covered with an Evening Primrose species. It was Oenothera biennis and is a favourite food-plant for the caterpillars of the Elephant Hawkmoth.
The flowers are pretty but its common name is well justified for I was too early to find any open. It is well-known in the field of complementary medicine as a source of gamma linoleic acid (in Daventry we speak of little else) but over the last couple of decades its supposed beneficial effects have been largely discredited.

Despite its common name it is quite unrelated to primroses but is in the Onagraceae, together with Godetias, Fuchsias and willowherbs.
Several seedlings of False Acacia, Robinia pseudoacacia, have popped up on our plot and for a long time I was puzzled by their source. There appeared to be no parent tree in the area. Then I saw it: a single specimen not many yards away but concealed behind ash and cherry trees. I'm afraid the saplings got short shrift but perhaps next year I should pot one up - although I'm not sure why.

Because allotment holders are increasingly reluctant to employ pesticides allotments are, it seems, becoming increasingly important wildlife oases in towns and cities.