I awoke to rain, not heavy and amounting to only a short-lived shower, but I could see that it was going to be that sort of day: quite warm and with dry spells but not a day to be trusted. I was keen to get in a walk but decided not to venture far. In the event I never ventured far from our house. Wimp!

Just lately I always seem to get held up within the first few yards of a walk and today it was a troop of mushrooms (mushrooms and other fungi growing together but physically separate are said to be trooping).


I am no mycologist but this may be Agaricus bresadolanus, a widespread but rather uncommon species. But, then again, it could be The Prince, Agaricus augustus! 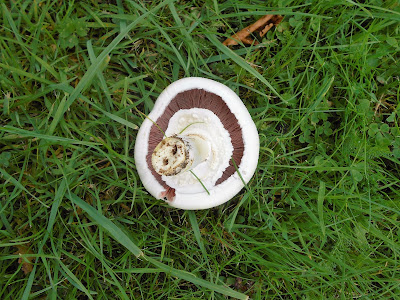 Any road, following my nose I continued to the broad verge of the A45 where it forms the Daventry by-pass. The vegetation is a rather interesting mix of grasses, other herbaceous plants (what the Americans call forbs), shrubs and sapling trees.

My feet disturbed several moths from the grass. The only one I managed to photograph was a Shaded Broad-bar, Scolopteryx chenopodiata, but I suspect all the others were too.

Certainly clovers and vetches, the food plants for the caterpillars, were in abundance.
At this point the sky darkened and I scurried home. There was no need to have rushed; the clouds passed over.

INTERVAL. There will now be a short break for lunch to be taken.

My truncated morning was compensated for by a visit to Kentle Wood in the afternoon. The weather was defying predictions and the afternoon looked set fair. I took my umbrella and within two minutes I was photographing a bug beaten from an oak tree. It was Iassus lanio, a curiously shaped but common insect belonging to the Cidadellidae.

It was not a new record for Kentle Wood, but the next one was. Tachina fera is one of the more impressive members of its family. It is a large, bristly fly with a largely black body but with a broad yellow flanks to its abdomen. The specimen photographed is a female and, once mated, she will go in search of noctuid caterpillars on or near to which she will lay her eggs. The eggs already contain a fully-developed larva and these quickly work their way into the host and eat it from the inside.

Just occasionally the host will survive this attack but generally speaking the consequence is death, making tachinid flies important in the control of some pests. This tachinid fly was taking nectar at a plant of Common Ragwort and on the same species - but a different plant - was a specimen of Corizus hyoscyami.

When I were now't but a lad this species was apparently confined to the coastal regions of southern Britain but has subsequently spread northwards. This could be put down to climate change but different habitats are now being exploited so the picture is not a straightforward one. Another puzzle is its warning coloration. This bug, sometimes called the Cinnamon Bug, lacks the glands, able to produce a foul smell, found on many similar looking bugs and is therefore known as a scentless bug. Is this a case of mimicry - a harmless insect adopting the coloration of an unpleasant one?


During the afternoon I took another specimen of the Shaded Broad-bar, a very pale example showing the variability of this species.

So, the total number of species recorded from Kentle Wood continues to grow, now standing at 484. Is five hundred by the end of August an unreasonable aim?