I visited Kentle Wood earlier today and came away feeling just a little more optimistic about the future. It isn't perfect but since its planting as a millennium project it has been maturing nicely. Another thousand Kentle Woods and we'll be getting somewhere.


Insects abounded and this gathering of Dock Bugs, Coreus marginatus, was very unusual - at least, in my experience. I counted twelve, including five mating pairs. There must be something in the water.
﻿﻿

Several specimens of the red and black froghopper, Cercopis vulnerata, were seen on my walk. This species seems to be having a good year. The nymphs live underground where they feed on roots, but they aren't numerous enough to do much damage.

I generally steer clear of sawflies. They form an interesting group but a comprehensive guide to their identification is unavailable. Having said that, certain species are quite unmistakeable, like this Tenthredo mesomela. Although it feeds on pollen and nectar it will often make small insects part of its diet.
﻿﻿

Craneflies such as Tipula species are conspicuous with their strong but bumbling flight. Relatively overlooked are the closely related limoniids. The photograph shows Limonia phragmitidis, easily recognised by the three spots on each wing and the stripe down the middle of the pale yellow thorax. It is very common in spring.

With a few notable exceptions spiders tend to be unphotogenic and I only took one picture. It shows a common crab spider (they often shuffle along sideways), a female Xysticus cristatus. This specimen has a rather large abdomen and may be distended by eggs.


Many beetles of the genus Cantharis have quite a bright red coloration or frequently they  are of the dull yellow-red colour referred to by coleopterists as testaceous. To us as kids they were all bloodsuckers. The fact that do not suck blood was irrelevant. However they are mostly predators and hunt among grasses and herbaceous plants. Cantharis rustica always has a dark blotch on the pronotum (the top of the thorax) but the form of the blotch is variable.

Kentle Wood has been in existence for under twenty years and the insect life, despite a limited range of flora, has proliferated amazingly. I have recorded 480 species and yet have barely scratched the surface, with few moths, no aphids, no snails, no ants and only a handful of bees, wasps and sawflies on the species list. We cannot (yet) bring back species from extinction but with public goodwill (which is developing fast) and government backing (sadly limited by interest groups such as those which control grouse moors) the ghastly destruction of the world's biosphere can be stopped and then reversed. The Knepp Estate re-wilding project shows how it could be done.

But it must start soon.


An examination of a green-eyed tephritid fly taken on Goat's-beard, Tragopogon pratensis, showed that it is the rather scarce Orellia falcata. A very pleasing record. 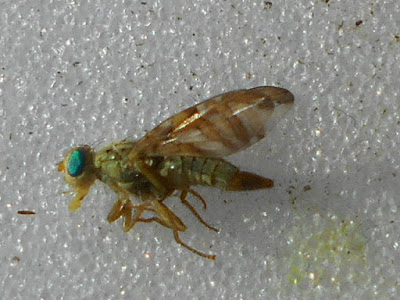