Our allotment plot received a visit today: I put in a short row of a dozen spuds. Things seem to be progressing nicely but there is plenty that could yet go wrong.


Last year I grew a patch of Phacelia, Phacelia tanacetifolia, intending to dig it in as a green manure. In fact I allowed it to flower, not having had the heart to rob bumble bees of this bounteous source of nectar.


Inevitably a few plants self-seeded. I left them to develop and they have begun blooming over the past few days. The flowers of this North American annual form a raceme which curls over like the neck of a violin, giving it the name of Fiddleneck, although it is often simply called Lacy Phacelia or even Blue Tansy. Although 'tanacetifolia' means 'with leaves like Tansy', the two plants are unrelated.


I was expecting it to attract bumblebees and indeed it has, with this Buff-tailed Bumblebee, Bombus terrestris, so furry that it looks way out of focus. This is the relatively small female worker; the queens are considerably bigger.

A Red-tailed Bumblebee, Bombus lapidarius, was equally busy on the following day.


I was not expecting to find shieldbugs visiting, but this Hairy Shieldbug, Dolycoris baccarum, was also present. Was it planning to take nectar? I'm not sure. It tends to feed on unripe fruits of various plants and I have never positively seen one nectaring.

With many of the crops, such as lettuces, potatoes, and rhubarb flowering is unnecessary and in the case of the later any flowers should be removed as they divert energy away from the production of the leaves with their long, edible petioles.
Broad beans, Vicia faba, are now coming into flower and I am hoping that the bees visiting the Phacelia will divert to the bean flowers. Last year we had a good crop so I am optimistic. 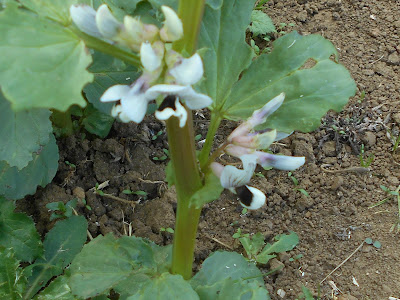 The broad bean was once known as Faba bona and as such gives its name to the whole of the huge Pea Family, Fabaceae. Oddly enough the Broad Bean is unknown as a wild plant and may somehow have evolved as an agricultural accident. It is not known from early Neolithic sites but is present in later Iron Age deposits. It seems to resemble maize, also unknown in the wild, in its evolution via agriculture although this American plant is found from more ancient archaeological sites in Mexico over 9000 years old.