Gardeners regularly get surprises in the garden - if they keep their eyes open - although if they take the form of weeds they may be the sort of surprise we could do without.
The pretty Labrador Violet, Viola riviniana, is a very welcome 'find', and a surprise too because I certainly didn't plant it.

With its purple leaves it is a very distinctive plant but there is a snag: last year I did spot one plant and this year at least a dozen are present. I hope it doesn't become a nuisance. It comes from the north-eastern parts of North America and is also native to Greenland. In many nursery catalogues it is still listed as Viola labradorica.
I have, during the last two or three years planted Pasque flowers, both in the native British form with purple flowers, and the red form which occurs in the European Alps. Several seedlings have appeared and are flowering this year for the first time. What I did not plant was the white form, and yet among these self-sown specimens a white one has appeared. And very welcome it is too. 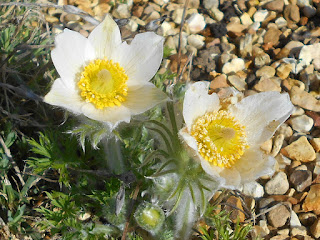 Morisia monanthos is a dainty member of the Cabbage Family, Brassicaceae, native to Corsica and Sardinia. The surprise not that it is present, for I planted it. The wonder is that it survived the winter, for at one point it looked the worse for wear. Now here it is, looking bigger and more vigorous than ever.
The flowers have the typical structure for the family bearing six stamens and four petals.  For a century or more the family was called the Cruciferae.
﻿

Other than the plants, a couple of insects put in an appearance. A Dark-edged Bee-fly, Bombylius major, was nectaring at the aubretia. It is a furry creature looking like, but quite unrelated to, true bees.
The second insect was a caterpillar. It was a dead ringer for The Clay, Mythimna farrago, but was on the small size for that species. I think it must be the Brown-line Bright-eye, Mythimna conigera - an all-too-common species.
﻿

It seems odd to be so pleased at finding these mundane insects in the garden yet, with our insect fauna having been devastated on the last three or four decades, all visitors are accepted.