I must admit that my efforts to find clear signs of spring have hitherto met with failure. But today a mendacious blue sky - it was distinctly chilly - lured me out to Matt Moser's land where I hoped for more success with wildlife recording. A cormorant flew high above me as I approached my destination. Its direction of flight suggested it was heading for the lake/reservoir at Daventry Country Park.
For the first few minutes I sloshed my way through wet sheep pasture finding a dozen or so spiders from grass tussocks on the odd dry area. Where the drainage was better gorse bushes flamed golden in the bright sun and I optimistically tried beating a few. My optimism went unrewarded. Zilch!

The high winds of the last twenty four hours had brought down a long-dead tree. The decaying wood offered possibilities but once again I drew a blank.
Here and there were holes showing where woodpeckers had been at work but if they fared no better than I then they went home hungry.
Some distance away a clump of conifers caught my attention and I strode over to take a look. As I approached I could see they were Douglas Fir, Pseudotsuga menziesii. This is a handsome species of tree from North America and, although it is widely planted for timber, it is often grown in (large) gardens for ornament.
The cones are distinctive, being pendulous with the scales on the cones having three protruding tips. Beneath the trees conditions were dry and sheltered from the wind.
I set to work sifting my way through the 'needles' thick on the ground.
Numerous beetles and spiders were recorded and I was delighted to find several specimens of the Pine-cone Bug, Gastrodes gossipes. This is a widespread species but has eluded me in the past and, it must be said, is not really photogenic.

Now for the job of identifying my 'bag' of specimens; I should more than double the total of species so far recorded. Naturalists do not like taking specimens for, although I am occasionally able to return a creature unharmed to its habitat, a large percentage finish up preserved in alcohol or mounted in other ways. Looking at the bigger picture, if a proper understanding of a particular habitat is obtained and it leads, as in this case, to an appropriate management regime, then it is a small price to pay.
I looked over the sheep-studded hills (which I have yet to investigate) and reflected that the sharp little hooves of the several flocks trample hundreds of invertebrates every day. That's life - or death.

In the event I added eight species to the total of which the most interesting was a specimen of the Larch Ladybird, Aphidecta obliterata. My poor photograph, taken in the gloom of Douglas Fir trees as the specimen dropped on to the beating sheet, shows that it has the typical ladybird shape but is pale brown in coloration with virtually no makings on the elytra (wing cases). It is rather scarce and I rarely take specimens, probably because I rarely investigate conifers. 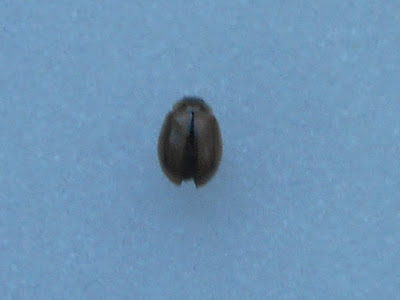