Just a stroll down The Twistle

People walking south-west from Byfield towards Banbury along the A361 face an unpleasant quarter of a mile or so; traffic is generally heavy, fast and noisy, the roadside is featureless and it suffers badly from litter. It is a relief when a right hand turn can be made on to The Twistle and so into Byfield by the back door so to speak. Litter remains all too common and a considerable number of vehicles use this road but the noise of the A361 steadily recedes and relative peace prevails.
I was pleased to see that a long section of the hedgerow - perhaps three hundred yards or so - had been properly laid. Too often a heavy sort of flail is used to cut down hedges and, although the resultant scars heal, the immediate consequence is an ugly mess.

Of course, laying a hedge by traditional methods means a temporary setback for wildlife (in this case a couple of fairly large ash trees had been removed) but the sunlight can get to the base of the hedge, promoting rapid development of the herb layer.  Aesthetically  too the result is far more pleasing. Nevertheless, at this time of the year there is little to get excited about.
Just before entering Byfield The Twistle crosses a cutting through which the Stratford-upon-Avon and Midland Junction Railway once ran. Access to this cutting has always been technically possible though made rather tricky by thick vegetation. But recently some shrubs seem to have been cleared allowing the cautious walker a way down.
I have always had more than my fair share of reckless stupidity so I scrambled down the steep and slippery bank for a closer look.  To be honest it was barely worth the effort and yet I was pleased to have made it. With a degree of foresight this could have been developed as an attractive walk to Aston-le-Walls and beyond; now it is far too late.
Facing in the other direction was the bridge I had just left. The cutting beyond this point has been filled in (with household waste?) and is now farmland.
Puffing and blowing I regained the road and crossed the bridge. The parapets of this structure are showing their age with significant cracks developing and these will surely require attention before long. 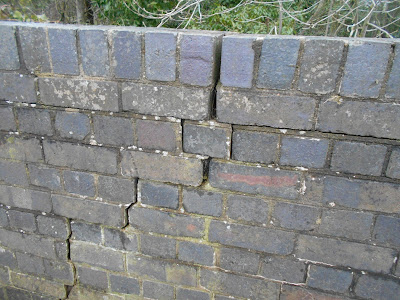 Interestingly patches of calcite stand out starkly against the brickwork, showing where lime in the mortar has leached out as a solution in water only to precipitate and form these deposits (the same process as in the formation of stalagmites and stalactites). It may be that the rather acidic rainwater of recent decades has accelerated this process. 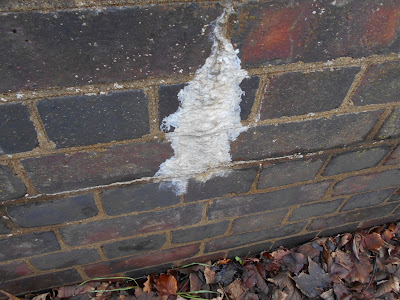 I pressed on and soon found myself entering Byfield via Westhorpe. Once a separate hamlet, the expansion of Byfield has led to the merging of these two settlements and it now forms one of the most attractive parts of the village. Mid-winter or not, flowers studded the carpets of Aubretia tumbling down south-facing walls. 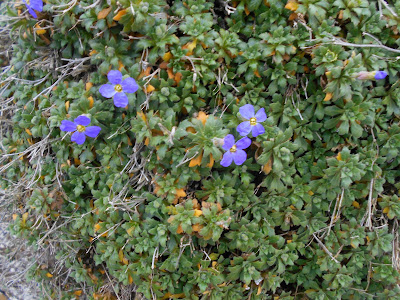 Another plant, often overlooked, was a form of snowberry. The commonest Snowberry, Symphoricarpos albus, generally bears white berries, reminding me in colour and size of the mothballs of my childhood. This plant however differed in having smaller, pink berries; it is Symphoricarpos x chenaultii and may in fact be a form of S. orbicularis.

As far as I am aware, all members of this genus are from North America. To be honest I regard these shrubs as rather lacking in interest but they have one redeeming feature: bees love the rather inconspicuous flowers for their copious nectar.
Winter Heliotrope, Petasites fragrans, was snaking through a wall at the corner of Westhorpe Lane. Like snowberry species, it is highly undistinguished (does that count as an oxymoron?) but, like true heliotrope (to which it is unrelated) it has a heavy fragrance, unfortunately not often obvious in cold and windy conditions. It is an invasive thug and is probably best avoided by gardeners.
And that was about it. In midwinter botany may not throw up surprises but the fact that something is commonplace does not mean that it is lacking in interest.