Most birders have a favourite patch - an interesting habitat not too far from home. He or she will visit it regularly and come to know it intimately. I suppose entomologists have a similar favourite and with me it is Kentle Wood. Not that it can be called prime habitat because as a wooded area it has only existed since the millennium, but it is convenient and occasionally throws up a surprise.
Despite it being my 'patch' it has been the best part of a month since I last visited it, but today was fine and sunny so I decided to go for it - a spot of 'kentling'.
It is a little early in the season for orchids to be in flower but I wanted to confirm that the Common Spotted Orchids, Dactylorhiza fuchsii, had not been interfered with. I need not have worried; a dozen or so plants were there and looked fine, with their distinctive and handsome leaves undamaged by rabbit nibbling.

Not far away, on a plant of Cow parsley, aka Keck, Anthriscus sylvestris, was the distinctive hoverfly Volucella pellucens. It is common throughout the summer and later in the year I expect to find it on bramble blossom but I am always pleased to see it. With the distinct black patches on the wings and the white area on the abdomen it can hardly be mistaken for any other species.
Scrambling up through the Cow Parsley was Goosegrass, Galium aparine. It is also called Cleavers but locally it is known to schoolchildren as Stickyweed. As a member of the Rubiaceae family it is related to coffee but I have to say any similarities are not obvious to me. The young leaves were twisted and distorted by the activities of a mite, Cecidophyes rouhollahi. It is a common pest but there appears to be no long-term damage to the host.

Also showing an interest in the Cow Parsley flowers was that distinctive beetle, Pyrochroa serraticornis. Its red head distinguishes from the black-headed P. coccinea, and the latter is, in my experience, less common.
The larvae feed on insects beneath bark. This second photograph also shows P. serraticornis but bright sunlight is making it appear paler. 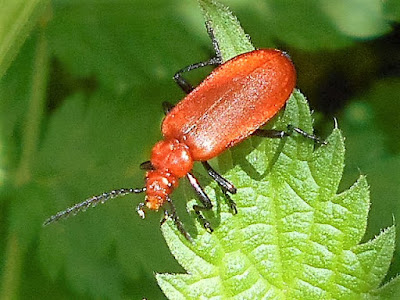 Butterflies and moths were not frequent on the wing today but as compensation some caterpillars were seen. Feeding on cherry foliage was the cryptically coloured larva of the Winter Moth, Operophtera brumata. This is very common and can often reach pest status despite the females being flightless with only vestigial wings.
Significantly larger, and generally more striking, was The Drinker, Euthrix potatoria. I would like to report that this is a rare and much sought-after moth but it is abundant and I showed a very small specimen in my blog about The Twistle as recently as the tenth of this month! Today's specimen appeared fully grown and may have been seeking a place to pupate.

I was taking a few diptera for examination later but there were other insects to merit attention. A female scorpion fly proved to be Panorpa germanica . At one time species were identified by the patterning on the wings but that is now known to be unreliable. Instead dissection of the genitalia is necessary, a fiddly but not intrinsically difficult job. Unfortunately I was unable to photograph a male, whose vaguely scorpion-like sexual appendages give these insects their common name. Incidentally they are completely harmless, living by scavenging.
Now for those diptera...