Charlton is a small but very pretty village in South-west Northants. Most of the houses have been constructed using the local sandstone and the settlement compares favourably with some of the most attractive Cotswold examples. With a population of about 200 people it would be tempting to regard Charlton as no more than a hamlet, but with a church (St James), a pub (the Rose and Crown) a village shop and a school it is clearly a genuine village. It also oozes prosperity and one suspects that a Jeremy Corbyn rally here would attract the traditional two men and a dog. There are several Charltons and the name is derived from ceorl's tun, a ceorl being a once-tied labourer who has been freed and give land to work.
But enough of these socio-political observations, today three of the village gardens were open to the public, so Chris and I took a look around. As it happened, the first of the three properties we visited, Walnut House, turned out to be the most interesting, perhaps in part because tea and cakes were on sale. We also purchased some plants. One was Pseudofumaria alba, a pretty little short-lived perennial formerly known as Corydalis alba. The yellow-flowered Pseudofumaria lutea is very common and grows in crevices on brick walls in Daventry; this largely white species from the Balkans is less often seen.

As is so often the case, the flowers merit a closer look, when the yellow throat and its membership of the Fumariaceae family is clear. I'm hoping it will self-seed and subsequently pop up in odd corners of our garden.
On a plant nearby a pair of shieldbugs were mating - in copula as naturalists often term it. They were on a herbaceous plant but were nevertheless Sloe Bugs, Dolycoris baccarum. This common insect, one of our prettiest shieldbugs,  is associated with White Dead-nettles and thistles but never, as far as I know, with sloes!
We ended up at the imposing Charlton Lodge, looking generally Victorian but apparently originating in the sixteenth century. 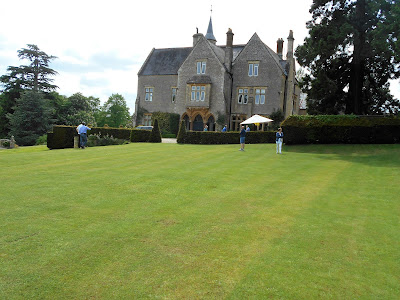 The grounds are very extensive with a herbaceous border some 140 feet long. Understandably the gardens, being large-scale, lacked any feeling of intimacy and the plants were rather mundane. It was not a 'plantsman's garden', but then nor were either of the other two visited. 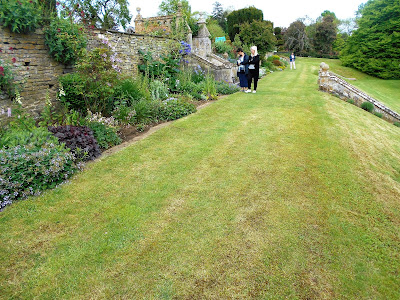 However, the weather was pleasantly sunny, the cakes were good and overall the afternoon was quite enjoyable.