Noah, is it worth putting the washing out?  Attributed to Mrs Noah, c. 4000BC


We have had an exceptionally wet few days. A planned visit to the lovely reserve, High Wood and Meadow, not far from Preston Capes, was a wash out  -  literally. So when the sun finally broke through earlier today I dashed off to Kentle Wood to take advantage of the weather. And I wasn't the only one. 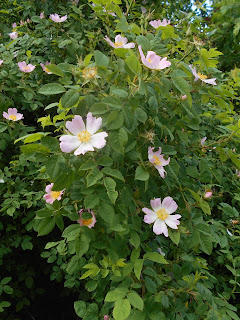 Dog Rose briars were studded with flowers, and with the flowers came insects: beetles, bees and flies were all there for the pollen, nectar or, it the case of wasps, to kill or parasitize the insects. 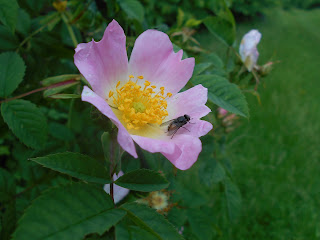 Some flies, like the male House Fly, Musca domestica, in the photograph, seemed content to sit and soak up the sun (entomologists sometimes call it 'loafing') and I was lucky enough to record the rather rare tachinid fly Wagneria gagatea. Tachinid flies are parasites too and their larvae rather ghoulishly eat their victims alive and then pupate (usually) within the corpse.

Butterflies were on the wing but only the very common Speckled Wood paused long enough for a photograph.
Many rose species have no nectar but here the butterfly is clearly imbibing the liquid, emphasising what a valuable shrub this is for wildlife (and for us too: in 1943 over five hundred tons of rose hips were collected in Britain and from these two and a half million bottles of rose hip syrup were prepared).
Common Spotted Orchids have progressed greatly over the past few days and their spikes have burgeoned (see blog for 5 June) to make a lovely sight.


In general galls take a while to develop to the point where they can be seen and identified. This one is the work of a tiny wasp, Andricus curvator, and was situated awkwardly in the gloom beneath increasingly dense foliage.

The form of the gall can vary according to whether the wasp chooses to lay the egg in leaf tissue, in a bud or even on a catkin. Oaks bear galls of an almost bewildering variety and so the tree is of particular interest to the cecidologist.

Then finally we have the spiders. I had, prior to this visit, identified forty one species from Kentle Wood. Would I add to the list?
This cucumber spider found its way into my sweep net. These can be a challenge to identify, especially the pair, Araniella cucurbitina/A. opistographa. The genitalia must be examined with great care and, as this specimen was an immature female the genitalia were not sufficiently developed for a certain identification. These spiders are generally quite small and will often live out their lives in a curve or fold within an oak leaf.


Now I need to sit down for three or four hours in front of a microscope to name a few more specimens.