Today found me in Byfield, Northants on a warm, almost sultry day. With a little time to spare I had a stroll around, reminiscing about the ten years I had spent there.
A tangle of weedy plants near the village green included a solitary plant of the Byzantine Gladiolus, Gladiolus illyricus, subspecies byzantinus (aka Gladiolus byzantinus). I last saw it growing en masse as a cornfield weed in Turkey but it is common over much of the eastern Mediterranean.
I was pleased to see it because imo it really is  an excellent garden plant. Not only is it more delicate and graceful than most available 'gladdies' but, not being a hybrid, it is more likely to attract insects. (Growing to its right is Wall Barley, Hordeum murinum, a close relative of the barley grown as a crop.)


The Cornbrook, a tributary of the Cherwell, flows through the village and at its banks near Fiveways is a clump of Yellow Flag, Iris pseudacorus.

It was widespread in the time of John Clare but since then, though perhaps declining in places, it has widely colonised the gravel pits created in the twentieth century.
From the pond-head gazed in vain
On the flag-flower's yellow hue.

The flowers merit a closer look for they are of great beauty, but introduce them only into large garden lakes; I once planted some in a small pond and within three years they had overwhelmed it! Early in the last century it was still being recommended for dysmenorrhoea (painful menstruation) but your G.P. wouldn't be amused to hear that you'd been chewing iris roots. 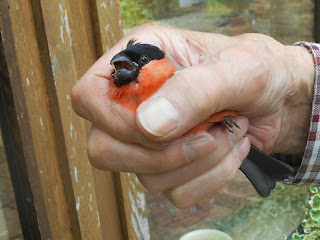 I called in to see my old friend Oliver Tynan and pointed out to him a lovely male Bullfinch, Pyrrhula pyrrhula, on the gravel path beneath a window. He carefully picked it up. An examination showed no obvious injury and we concluded that it had been stunned by colliding with the glass. He carefully placed it in a position where cats would be unlikely to find it. This species may be destructive of fruits but I wish it well. 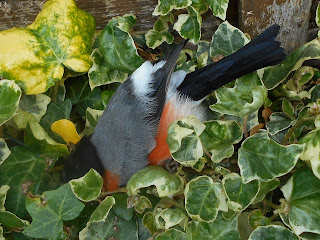 Incidentally, why did I include the Latin name? As I have mentioned before, it is for people in other countries who may be unfamiliar with our vernacular names. (A lady from Cape Cod in the USA responded to one of my blogs asking me about a gall species on one of her beech trees and wanting to know its distribution in the States. I referred her elsewhere; I don't think she had realised I was in Britain.)


Postscript The following morning Oliver told me that the bullfinch had died.