Lovely sunshine lured me out to Kentle Wood. The footpaths were treacherous, with extensive patches of mud; beneath the trees some areas were flooded, reminding us of the high clay content of the soil.

Trees were mostly bare with only the occasional hazel showing fresh green foliage. A little imagination was needed to foresee the glorious blossom that the rows of cherry trees would be displaying a few weeks hence. 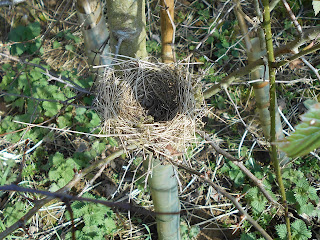 A bird's nest, looking pathetically vulnerable, occupied a low hawthorn bush. Yet I must have passed that spot dozens of times last year without it catching my attention!

The only blossom to be seen was borne on
blackthorn, Prunus spinosa, twigs and, although it was rather chilly, there was enough sunshine to tempt flies from their winter hideaways and seek out the nectar. But by and large there were not many insects to be seen.

For the record, the insects recorded were:


Not a big 'haul', nor was I expecting much. But it was a sign of things to come and I returned home well satisfied.


Postscript (The Aleochara brings the total number of invertebrates I've recorded from Kentle Wood to 316 species.)