Not the best of days

Storm Kiara had paid Daventry a visit and we appear to got off lightly. It is true that a few fences had been blown down but damage seems to have been relatively superficial. 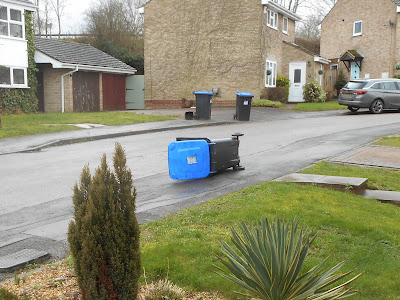 The morning was quite breezy but bright sunshine temped me to make my first visit of the year to Kentle Wood. Needless to say, the sun rapidly disappeared to leave a steel-grey cloudy sky to take its place. Things did not look promising.


I turned over a few logs in the hope of finding a carabid beetle or a 'staph' (staphylinid beetle) but there was nowt.

I proceeded with caution as the rides though the wood were slick with mud and once or twice my feet slid sideways alarmingly. Accordingly I forsook the path and made my way into the trees away from danger. As a result I caught my foot on a snaking bramble and fell flat on my face. Bugger!

I shouldn't grumble because the brambles yielded my only insect of the morning. The sinuous mine of a Golden Pigmy Moth, Stigmella aurella agg, raised the number of arthropods I've now recorded from Kentle Wood up to 541.

I have cautiously placed the letters agg behind the Latin name as this 'species' is really a complex aggregate of closely related species, but S. aurella is the most commonly encountered species within the group.


This is a good time of the year to look for the Scarlet Elf Cup. It is a delightful little fungus often on dead plant material at ground level. Indeed I found some specimens in Kentle Wood about three years ago but today there was nothing doing.


I decided enough was enough, turned on my (very muddy) heel and headed for home, getting there shortly before a heavy - and unpredicted - snow shower.