Its Wednesday so it must be Byfield

Another day of deceptively bright sunshine but it were right chilly - brass monkeys in fact, but I steadfastly made my way to Byfield Pocket Park. Leaves carpeted the ground, and included those of Pedunculate Oak, Quercus robor, and  Turkey Oak, Quercus cerris, plus a few beech leaves for good measure.

A few leaves, very varied in shape, still clung to the Turkey Oak. Such was the variation that I wondered if the tree in question was a Quercus robur/Q.cerris hybrid. 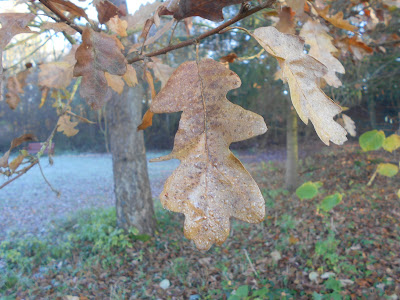 A third species of oak dwells in the pocket park. Three specimens of the Holm Oak or Ilex, Quercus ilex stand at the eastern end. Despite its Mediterranean origins this is a tough character holding its evergreen leaves throughout winter. Every year I search for its tiny acorns and (almost) every year I fail. Perhaps I'm short-sighted but I feel that the trees simply don't bear many. Ilex is of course the generic name for holly (Ilex aquifolium, and the leaves of young holm oaks are similarly spiny.

In fact I did not dwell in the pocket park but re-entered the village via Church Street. The church referred to is the Holy Cross and tumbling over the perimeter walls were ivy plants. I was surprised to note that they were in flower because although the species frequently flowers into November, December was, I felt, pushing it a bit.

The flowers were a bit on the tatty side but there was probably enough in the way of nectar and pollen to interest any bees prepared to investigate. However, although the temperature had reached 7 degrees C., that was far too low for bees to be out and about.

However a solitary fly was sunning itself on an area of sunny church wall but if it was hoping for some company I suspect it was out of luck. In the photograph it will be seen that short golden hairs cover the thorax, showing it to be a species of Pollenia. It is likely to have been Pollenia rudis, a very common relative of the blowflies, but I made no attempt to capture it for confirmation.

Various items of interest were noted along Church Street but I will limit myself to one more. A solitary Strawberry Tree, Arbutus unedo, stood in a garden. Solitary it may have been but it bore several fruits.

Like the ivy flowers they were tatty but a cheerful sight nevertheless. This tree, surprisingly a member of the Heather Family, Ericaceae, is regarded as native to the southern parts of Ireland but may have been brought over, unwittingly or deliberately, by neolithic settlers from the Iberian peninsula. Perhaps we'll never know for sure. It is not bone hardy and some years ago the trunk of a specimen of ours was split by a hard frost and never recovered. Fortunately the plant we now have in our back garden is quite well sheltered.