Leaves are still green and our gardens are still full of flowers and yet...


There is an autumnal feel about the fields and hedgerows. Perhaps it is the ripening fruit that gives the game away. Apples were hanging heavily from the trees on Matt Moser's land when I visited yesterday. They are not intended for human consumption but they will be allowed to fall and act as food for thrushes and other birds. Insects too will batten on the rotting fruit and small mammals such as field mice will also tuck in. And larger creatures such as badgers won't want to miss out.

That some of the fruit is blemished is irrelevant. Animals will be putting on fat for winter survival and a bit of scab will be ignored.

Spindle, Euonymus europaeus, is widespread in the eastern parts of our county, where the soils tend to me calcareous. Foxhill Farm consists of rather acid grassland and the fact that spindle is common in its hedgerows is down to the extensive plantings made by Matt and his staff.

The fruit is steadily ripening and, although it is highly poisonous to humans, the birds will soon be dining on the berries - always described in books as sealing-wax red. In mediaeval times the hard, straight young branches were used for 'skewers, toothpicks, pegs and knitting needles' (Ref 1). Clearly the wood was not regarded as poisonous. Strange that it should be called the spindle bush because, although it may indeed have been employed for spindles, that was by no means its main use.

The leaves are being consumed by hungry insects but I've not yet identified the culprit(s) and perhaps never will.

Spindle was first recorded in our county from Abington, Northampton in 1822 by George Baker. Perhaps it still lingers in the hedge beside Abington Meadows but I doubt it.

Nothing startling was noted yesterday and the fact that I even bothered to photograph the mines on this buttercup leaf tells its own tale. It is the work of Phytomyza ranunculivora, a fact that can be established by carefully examining the pattern of the frass (poo) within  the mine.

Back home the signs of autumn are everywhere but Pasque Flowers continue to ignore the calendar to produce a flower or two. Last week it was rich, almost maroon blooms. The white down, clearly visible on the 'petals', helps to distinguish the Pulsatilla genus from anemones.


Today a lovely, pure white bloom, again with the downy hair clearly showing ('densely sericeous' according to Clive Stace, Ref 2) has made an appearance. Bees have been visiting so the flower may even produce fruit, although I have so many seedlings popping up that they will be redundant.

I'll just mention one other harbinger of autumn in our garden. Hylotelephiun spectabile (formerly Sedum spectabile) is producing its flowers in abundance. They are of a rather mucky pink colour but I will forgive them this shortcoming as they are attracting honey bees, hoverflies and butterflies in abundance.

The visitors today included this Comma, Polygonia c-album. It was once a rather scarce butterfly and only commonly found in hop-fields. The decline of the hop industry and the widespread use of insecticides could have spelt doom for the species but instead it transferred its allegiance to nettles (a relative of hops) and has since flourished. 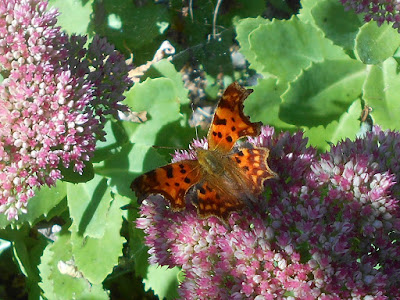 As Peter Marren has pointed out (Ref 3) several butterflies and moths have names related to punctuation marks or letters, generally referring to their wing markings. There is the White Colon moth, Sideritis turbida and the Essex Gem, Cornitiplusia circumflexa. The Scarce Silver Y moth has a Y-shaped mark on the wing, but this can be also be interpreted as a question mark and the insect carries the name of Syngrapha interrogationis.

Whoa! I am starting to ramble. Time to put a stop to this blog (and, more urgently, time for lunch). Finis.