Al is often mentioned in references but no one even mentions who Al is. Is it Albert or Alice? It is one of life's great mysteries.


Another great mystery is how French Crane's-bill, Geranium endressii, came to be in Stefen Hill Pocket Park. It is a pretty thing, originally from the Western Pyrenees, and presumably a garden escape.

It probably attracts the occasional insect although it had no such visitors when I photographed it today. Insects or not, as far as I am concerned it is very welcome.

Nothing in the pocket park is currently flowering more profusely than the patches of brambles. They are attracting lots of insects but it is a brave entomologist who wields a sweep-net over the thorny branches. Certainly I have badly snagged my net several times over the years. I did remove, with great care, a few tiny insects from the flowers but they will have to await examination under the microscope before I determine what manner of beast they be.

Bugs were doubtless abundant but again some, notably the cicadellids, will also need to go under the microscope. Some bugs were, however, obvious. I felt like a voyeur as I photographed this pair of Nettle Ground Bugs, Heterogaster urticae, going about their reproductive duties.

Mites are tricky. There are probably very few people around who can be regarded as competent acarologists but fortunately, for people like myself, many mites form galls which are more easily dealt with. The galls on this alder leaf are the work of Aceria nalepai*. The species is named after perhaps the most famous acarologist of all, the Austrian, Alfred Nalepa, who describe well over 400 species of these tiny spider relatives.

I had intended, as the blog title suggests, to mention the fungi I encountered on today's walk - but then I remembered my New Years Resolution not to allow myself to be diverted by these diverting organisms. So just the pictures then...

Finally, as a coda, I popped into Daventry later and noticed another odd fungus...

Again, I didn't attempt to identify it. 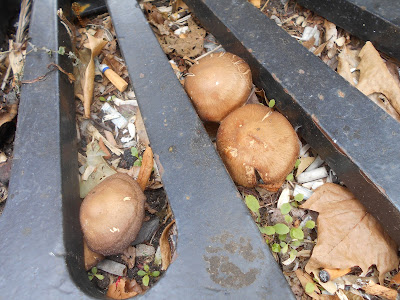 All very odd. And here perhaps a consequence of neglect by a de facto bankrupt local authority.