I've taken a break from blogging for a few days, partly 'cos I've been busy but also because the foul weather has largely kept me indoors - too wimpy to go out. But I shouldn't grumble as local farmland is still displaying cracks in the soil an inch or more wide.


The rain has topped up my half-barrel and it's current level suggests we've have a shade over an inch of rain over the last couple of days.


A couple of Water Lettuce plants, Pistia stratiotes, drift around in the barrel. They are odd plants, their roots spreading, finger-like, searching for dissolved mineral salts in the water. They won't find much as I've kept deliberately kept nutrient levels low. The species is not at all hardy and I'll doubtless lose my plants over the winter. As for the flowers, they are tiny and difficult to find deep in the rosette of leaves.

Pistia is a genus in the Arum Family, Araceae. The family is huge, with some 3,750 known species but in Britain we are not well off, having just two species plus another two or three which are naturalised. Our two native species are Arum maculatum, known as Lords and Ladies, Cuckoo Pint, Wake Robin and a host of other names plus the Italian Lords and Ladies, Arum italicum, native to the south of England and South Wales. The thick root (actually a rhizome) of the Italian Lords and Ladies is rich in starch and this was extracted and used for stiffening Elizabethan ruffs and other items.

Perversely, many plants are at their best, with flowers being produced in abundance. Our two Yuccas I have already mentioned but a foxglove is also in bloom. 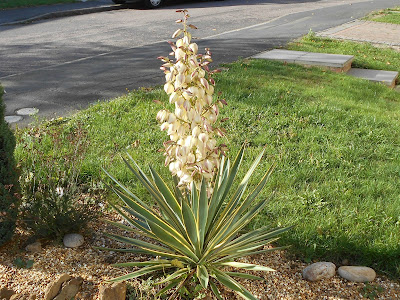 This is a variety of Digitalis x valinii, a hybrid produced by crossing Digitalis purpurea with a species from the Canary Islands. The Canary Island plants were formerly classed as Isoplexis species but are now generally regarded as true Digitalis species. The hybrids are reasonably hardy and, in our sheltered back garden, seem happy. Unsurprisingly these are be sterile and, not producing seeds, stay in flower longer than a fertile species.

These crosses are sometimes marketed as 'Digiplexis' hybrids but the name is of doubtful validity. A friendly thrush has pulled out the label from my specimen and I can't yet recall the name under which I purchased it. But I like it.

As for the Strawberry Tree, Arbutus unedo, it is flowering beautifully. This is the best display it has put on since we bought it.

Unfortunately the conditions are so wet that it isn't likely to receive any insect visitors for the time being. The flowers are beaded with droplets of rain but in the pendulous, flask-shaped flowers the pollen is safe and dry.﻿﻿