A couple of days ago, quite by chance, I stumbled upon a long-disused track towards the southern edge of Foxhill Farm. It had been metalled but was now overgrown, with weeds splitting open the surface. (I was inspired once home, to put on a c.d. of Janacek's delightful piano suite 'on an Overgrown Path.) The sides of the track were lined with bushes of hawthorn, elder, snowberry, gorse, viburnum, blackthorn, privet and spindle. Most had been planted, with the last two not naturally found on the mildly acid soils of the farm but more normally found on limy soils, whilst snowberry is not a British native, being a North American introduction. Swathes of the willowherb known as Great Willowherb or less prosaically, Codlins and Cream, Epilobium hirsutum, also bordered the track.

The Spindle, Euonymus europaeus, was fruiting in abundance, turning an otherwise unremarkable-looking shrub into a very eye-catching feature. Indeed, the word euonymus means 'of good name' for, although it is rarely planted it was highly regarded for various features (despite the fruit being distinctly poisonous to humans, though clearly not for birds, which are happy to consume the berries). The wood is strong and hard so it was much used for making spindles, hence the common name.

In my childhood almost every suburban garden seems to have its privet hedge, with the chosen species invariably being Ligustrum ovalifolium, a native of Japan. It was dull, useless for wildlife and needed constant clipping but it was apparently a 'must have'. I suppose its evergreen nature was a plus. The clipping regime greatly reduced its capacity to flower and fruit, doubtless much to the relief of beekeepers because, I gather, the resultant honey is nauseous.

Privets belong to the Olive Family, Oleaceae, and there are about fifty species in the genus. Our native privet is Ligustrum vulgare, and this is the species occurring at Foxhill Farm. The species attracts a number of insects including our largest resident moth the Privet Hawkmoth, Sphinx ligustri, scarce in Northamptonshire and thinning out rapidly further north. I should perhaps not be too dismissive of Garden Privet for the insects which feed on Wild Privet are generally happy to accept the garden alternative. (Also content with privet, as many schoolchildren know, are stick insects.)


Late summer into early autumn is the prime time to be looking out for galls or for leaf mines. Insects have done their worst and left the scene; the naturalist must be prepared, like a detective, to examine the evidence and come up with a culprit. So I was intrigued to find that this acorn on a Pedunculate Oak, Quercus robur, had become distorted, losing its normal symmetry. 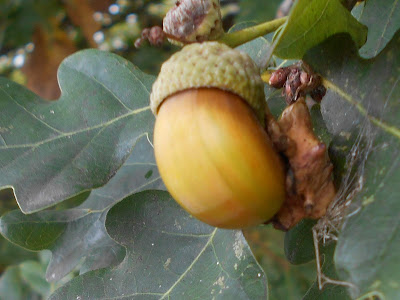 In this case the culprit was a wasp, Andricus quercuscalicis. The gall it had caused, the very common knopper gall, had developed and grown into the acorn, with the odd result shown in the photograph. On the same tree was a silk-button gall, yet again caused by a wasp, in this case Neuroterus numismalis.﻿


This and other species took the Foxhall Farm total to 404.