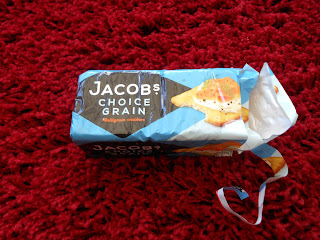 Whoops! Sorry about that. I meant the sheep.

This breed, originally imported from Spain, has a sort of piebald coat, and I once thought that their name referred to Jacob's multi-coloured coat but I was wrong.
Jacob separated the lambs, and made the flocks face towards the striped
and all the black in the flock of Laban; and he put his own herd apart
and did not put them with Laban's flock.
Genesis Ch 30, verse 40

Well, that's all cleared up...or not.

They ran up to me but stopped about three metres away and quickly backed off when I tried to approach them. The greeting was on their terms, not mine. Each wore a thick fleece and they surely needed it for the conditions were bleak - three degrees according to my car's dash. We were on high ground and the wind, though not strong, had a real bite to it. In my childhood no one ever seemed to refer to the 'wind chill' but today this was a very relevant factor. 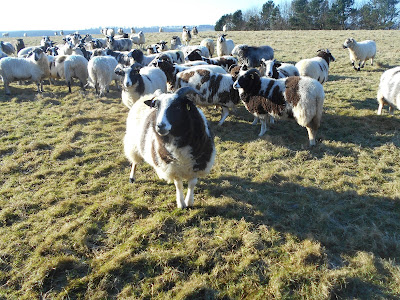 In the conditions I almost turned back but told myself not to be a wimp and decided to pay a visit to a small patch of woodland clinging to a west-facing slope. Trees were largely oak but beech and pine - neither native to Northamptonshire - were also present, plus a little holly. So steep was the slope that I could only make progress by going from tree to tree, clinging on to convenient branches. It was hard going and my hands were already beginning to go numb.
Was it worthwhile? I did take a few spiders in leaf litter but insects were  conspicuously absent, and after half an hour I decided to absent myself too. Nevertheless, as is so often the case, I decided that I must re-visit tis little woodland in a couple of months time as it clearly has lots of potential. Some nearby clumps of gorse, on the mildly acid soils, were tempting but they too must wait for a later visit.


In fact I added one spider, Stemonyphantes lineatus and a rove beetle, Quedius nigriceps, to the list. It now totals 40 species.