Round and round the garden...

March still has over a week to run yet things are now really moving. A week or so ago our Mezereon, Daphne mezereum, had a decent showing of blossom but now the branches are wreathed with the lilac, heavily fragrant flowers. It will bear a crop of scarlet berries later in the year and I should be able to rear some progeny from these.

In one of the alpine beds Saxifraga 'Peach Melba' is flowering very well. It is a hybrid and it is often quite helpful to know the parentage of a plant in order to judge its requirements - sun/shade, acid/alkaline, moist/dry - but this plant appears to have been an accidental hybrid of unknown parentage. It seems very happy anyway.
The Myrtle Spurge, Euphorbia myrsinites, was only planted recently but it is an undemanding species and seems to have settled in nicely in a rather gritty loam. Its name derives from the Greek word 'myrsine' meaning a Myrtle but, although I grow a true myrtle shrub, Myrtus communis, I am at a loss to see any resemblance.

The flowers of Euphorbia species are structurally very interesting. They are known as cyathia and are well worth examining closely. Although their superficial appearance may vary greatly from species to species (take the spectacular Poinsettia, Euphorbia pulcherrima) in detail they are essentially the same. A huge range of Euphorbias is available and to my mind they have only one drawback: they bleed a white latex which is poisonous and very irritating to sensitive skin.
﻿

Despite lacking bright colours or any obvious perfume Euphorbia flowers can be very attractive to bees. 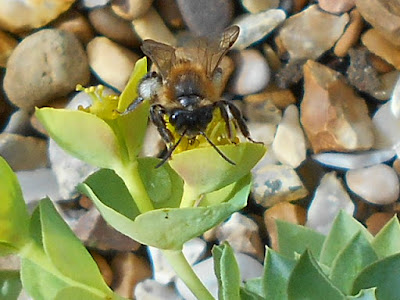 Also poisonous are Pasque Flowers. The Red Pasque Flower, currently in bloom in our front garden, is sometimes referred to as Pulsatilla rubra but in reality it is just a form of our native Pulsatilla vulgaris, found wild in the east of Northamptonshire.
Like Euphorbia flowers, its blooms also merit a closer look for they too have a curious structure. The 'petals' are seen to be silky and in fact they are not true petals, being better described as petaloid sepals. Within them a cluster of golden stamens surrounds a group of darker styles. These are the tips of the carpels and, later on in the season, will lengthen and become feathery (showing the plant's relationship with Traveller's Joy, Clematis vitalba) helping the wind to carry away the ripened fruits.
The word 'Pulsatilla' appears to come from the Latin pulsata, to shake, and may refer to the way in which these flowers shake in the wind. The genus Pulsatilla was once included in with the anemones, whose name is also derived from the Greek, for anemos means 'the wind'. Curious!