This, it seems, is the correct name for the pocket park at Aston le Walls. 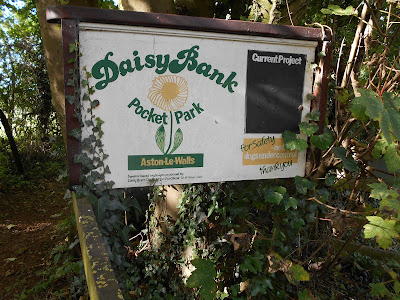 It is situated beside the Welsh Road to the west of the village and is one of the more interesting of these little parks hereabouts, with a good range of habitats on offer to our flora and fauna. Like many local pocket parks (Byfield, Woodford Halse) it makes use, at least in part, of disused railway tracks.

The photograph shows the line of the old track looking north-east as it passes under the Welsh Road (so called because this was an old drovers' road used for driving animals - mostly sheep - from the Welsh hills to markets in Northampton, London and so on). The railway line was the Stratford-upon-Avon and Midland Junction Railway. There was no station as such at Aston le Walls but there was a public siding for the handling of livestock, bricks, coal etc. Maybe the odd person sneaked on but there was no official passenger service.

Anyway, as so often I digress. The park is approached via an unpromising and rather gloomy path through blackthorn and hawthorn, then down a flight of steps before widening out into a grassy meadow area.  A large skein of Canada Geese, honking clamorously,  passed over as I entered this open ground.

I was delighted, and a little surprised, to find Meadow Cranesbill, Geranium pratense, still blooming at this late date. I must admit that my camera failed to do justice to them, for they were of quite an intense violet-blue colour. This species is a parent of many lovely and popular garden hybrids

Why so late in flower? They may have been inadvertently subjected to a form of 'Chelsea chop'; this is a strategy well-known to horticulturalists who find that if a perennial is cut back in late May - about the time of the Chelsea Flower Show - a crop of later flowers can be obtained. I suspect that these geraniums were somehow cut back, perhaps in June, and were now responding with these late blooms. Spindle, Euonymus europaeus (in some old books it was given the spelling of 'Evonymus'), was flaunting its lovely sealing-wax pink fruits.

Really each fruit is a capsule in three parts, with a single seed in each cell. All parts of the plant are poisonous but the (very few) known cases of poisoning seem to be the result of eating the fruits. Why anyone would attempt to eat them is a mystery as they have a thoroughly unpleasant smell and a bitter taste.

In the bordering hedgerows the brambles were heavy with fruit. When they become over-ripe they are attractive to butterflies like this Red Admiral which was so busy 'lapping up' the juices that my approach failed to disturb it.

The catkins on a nearby hazel were already developing for next spring. They will steadily lengthen over the next few weeks and, if last year is anything to go by, some will be showing their stamens by Christmas.
And close by on a hazel leaf sat one of several Green Shieldbugs, Palomena prasina, about which I will say no more as I have discussed the species in a recent blog, other than mentioning that it will take on a brown coloration over the next few weeks as camouflage as it hides away beneath the leaf litter. Bugs have an unpleasant taste and odour anyway, thus deterring predators.

I earlier mentioned the Meadow Cranesbill but several other plants were in flower.  One species was Hedge Bedstraw, Galium mollugo. It looks like a small version of Goosegrass, Galium aparine, but the bristles on the leaf-edges point forwards, so that it will hardly cling to clothing. It is a curious fact that the Rubiaceae family, to which Galium species belong, also contains coffee - Coffea species.


Also flowering were those ever-reliable plants Hogweed, Heracleum sphondylium, and White Dead-nettle, Lamium album. I have found the former in flower from March to early December but, although it attracts great numbers of insects throughout the summer I found nothing on it today other than a few bugs (true bugs, that is) which I'll examine later.

White Dead-nettle I have found in flower during  every month of the year.  It barely needs a photograph but the plant is of interest if only because the genus Lamium gives its name to the Lamiaceae (in old books, Labiatae), a family which includes lavender, sage, marjoram and so on.