As I happened to be visiting Byfield today it seemed an opportune time to cast an eye over the nature reserve at Woodford Halse. On my last visit I had looked at the western part of the reserve; today I strolled east, or actually nearer south-east. It was fine and warm, though very blustery. Within a couple of minutes I had dislodged a rather striking caterpillar from a clump of nettles. It was the larva of Abrostola tripartita.

The adult moth, the imago, is known as The Spectacle and is a common species. It gets its name from a raised tuft of scales on the thorax which, when viewed from the front, resembles a pair of spectacles.


Three species of thistle were present, all species of Cirsium. The most common, often attaining the status of an agricultural pest, was Creeping Thistle, Cirsium arvense. This is a nuisance in both in pastures and among crops and indeed arvense is derived from the Latin arvum: a field.

It produces abundant seed but readily reproduces from fragments of the creeping rootstock, distributed by cultivation. It was surely this species John Clare had in mind when he wrote:

Each morning now the weeders meet
To cut the thistle from the wheat.
Clare's Shepherd's Calendar, 1827
The second species, also extremely common, was the Spear Thistle, Cirsium vulgare (C. lanceolatum in some older books). This is also a nuisance but is a biennial and is thus more easily eradicated.


In its first year the plant forms a very thorny rosette, able to penetrate thin-soled footwear.

The third species was more of a pleasant encounter. On the steep sides of an embankment were several spires of Woolly Thistle, CIrsium eriophorum. This is a handsome biennial and would surely make a fine border plant.

The bracts are thickly cobwebbed with white 'wool' and G. Claridge Druce refers to a specimen in Whittlebury Forest over six feet high.

Where the Thistle meets the light
With its down head cotton white.
John Clare, Cowper Green, 1821 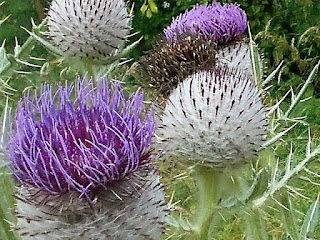 The species seems to prefer a limy soil and is probably less frequent than in Clare's time, perhaps easily weeded out by farmers.

Now for the thorns. I was pleased to find, on a Dog Rose, Rosa arvensis, a fine Robin's Pin Cushion. This is a gall, induced by the wasp Diplolepis rosae. As I have written in an earlier blog, this gall has been the subject of much investigation in recent years and a surprising number of other insects have been shown to be associated with it.

A few moments later - disaster. I mentioned in the opening paragraph that it was  blustery day. A sudden gust and my sweep net was firmly caught on a wild rose and there was a nasty tearing sound! It was time to go home anyway so I'll be doing some repair work tonight. Heigh-ho.