The pocket park at Byfield occupies land upon which once stood the village railway station. The station was on a rambling line, the Stratford-upon-Avon and Midland Junction Railway, which ran from near Olney, in Buckinghamshire to Bidford-on-Avon via Towcester and Stratford. Throughout most of its history it struggled to remain solvent even though, at a large livestock sale in Byfield in 1916 'more than a thousand sheep and three hundred cattle were sold. All of these were shipped by rail in 50 cattle wagons split into three special trains'. (R. Riley and Bill Simpson, A History of the Stratford-upon-Avon and Midland Junction Railway. Lamplight Publications, 1999) 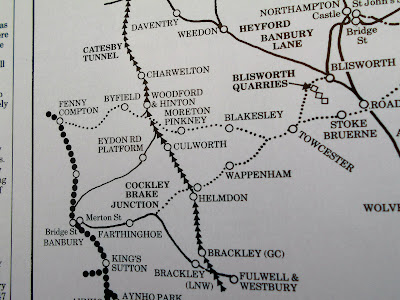 The station lay between Moreton Pinkney and Fenny Compton and for a few years was sustained in part by the handling of iron ore from the Byfield area. Nevertheless, closure was inevitable and operations finally came to a halt in 1965. Nature soon began to reclaim the now-vacant land and, to cut a long story short, the site of the station and some land adjacent to it now forms the pocket park.

Chris visited Byfield earlier today to see an old friend Julie so I took the opportunity to visit the pocket park, leaving the two to have a natter. The weather was warm and dry; in fact the weather has been so dry that many plants were beginning to wilt. Not apparently suffering was a newcomer, the Nettle-leaved Bellflower, Campanula trachelium. And what was it doing there?
﻿

The species is reasonably well distributed in Northamptonshire but I have not found any in the immediate area so its finding here in the pocket park is a mystery. (map from Gent and Wilson: "The Flora of Northamptonshire and the Soke of Peterborough" 2012)


The plants may have been struggling a little, but the bugs seemed to be doing well.

From a birch tree a specimen of Elasmostethus interstinctus, the Birch Shieldbug (what else?) dropped into my net, and on the same tree a crèche of Parent Bug, Elasmucha grisea, nymphs was clustered. This species is found almost exclusively on birch although alder is sometimes used.

Of the mother there was no sign; perhaps she now felt that the distinctive nymphs were capable of fending for themselves and so her parental duties, for which the species is noted, were no longer required. As explained elsewhere, if danger threatens the nymphs will huddle under the mother's body until the threat has passed.


A nearby Aspen tree also yielded a shieldbug. The Forest Bug Pentatoma rufipes, can reach about 14 mm, making it is one of our largest shieldbugs, and also one of our most handsome.

One thing Byfield Pocket Park is not short of is stinging nettles so, at this time of the year, I was very likely to find the caterpillars of the Small Tortoiseshell, Aglais urticae. Sure enough, several little clusters were found. This will be the second generation, the first larvae having been present in May.  The ones photographed will enter their final instar shortly and then begin to disperse. As a rule there are five of these instars (growth stages) with each giving rise to a slightly more advanced larva.

At this point I heard the crunch of gravel in the car park. Chris had come to collect me and I was content to go, having had an interesting hour or so.

Going through my specimens later a found I had collected a fly which had me puzzled. It turned out to be a Tachinid fly. Tachinids are parasites (Imagine a sort of Sir Philip Green with six legs and a pair of wings) and the species I had secured turned out to be Subclytia rotundiventris, and it is known to be a parasite of the Birch Shieldbug.
A tachinid fly is normally recognised by a structure known as a subscutellum, but with this species the subscutellum was so little developed that I failed to recognise it. As a result I spent two hours following false trails. Anyway, I was well pleased because this fly is far from common.