We live only a couple of hundred yards from the A45, but hear little or no traffic. This is because a thick belt of trees separates us from this very busy road. I set out this morning, 1 November, with the intention of checking out this area.

Signs of autumn were everywhere.

The fruits of a Horse Chestnut littered the ground, spilling their seeds - "conkers". When I was a child these would have been eagerly snatched up but now they lay neglected. The fruits were free of the usual spines so I'm pretty certain that the parent tree wasn't the usual Aesculus hippocastanum but was Red Horse-chestnut, Aesculus x carnea, a hybrid between A. hippocastanum and A.pavia


The Horse Chestnut is a native of the Balkans; Red Horse-chestnut is the result of crossing hippocastanum with the North American Aesculus pavia but it produces viable seeds and is even naturalised in parts of Hampshire

The tree belt consisted of a good selection of species with beech, oak, ash, cherry, sycamore and field maple present.

The fruits of the field maple, Acer campestre, were particularly striking, having taken on lovely rose-pink tints. 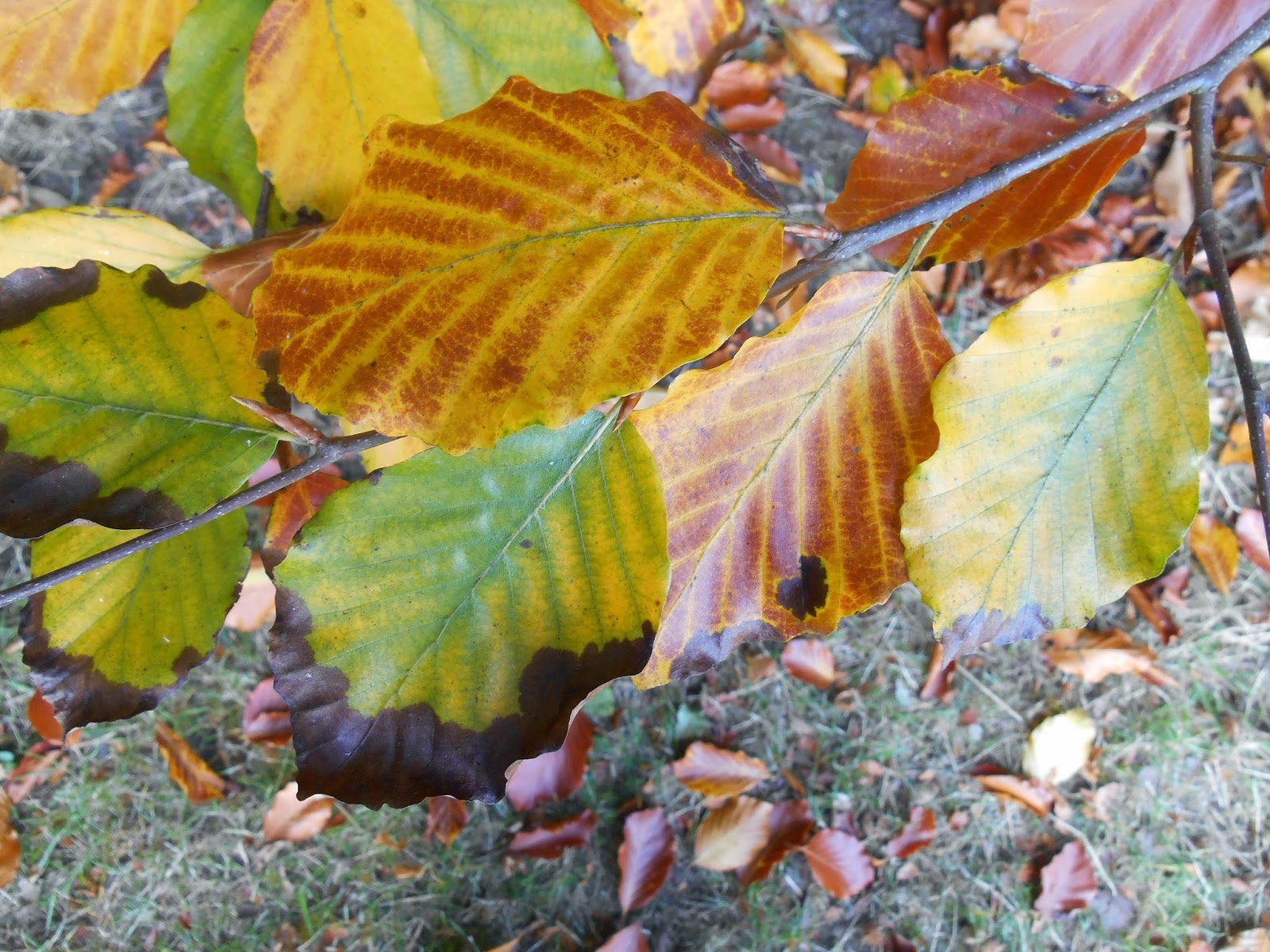 Colour was also provided by the foliage of beech, Fagus sylvatica,with bronze and russets beginning to suffuse the leaves.

The distinctively long and slender buds of the beech were also increasingly obvious, holding promise for next spring, when the lovely  foliage, of a delicate lime-green will break out.


Discolored humps on the upper side of beech leaves were caused by a mite, Aceria nervisequa. 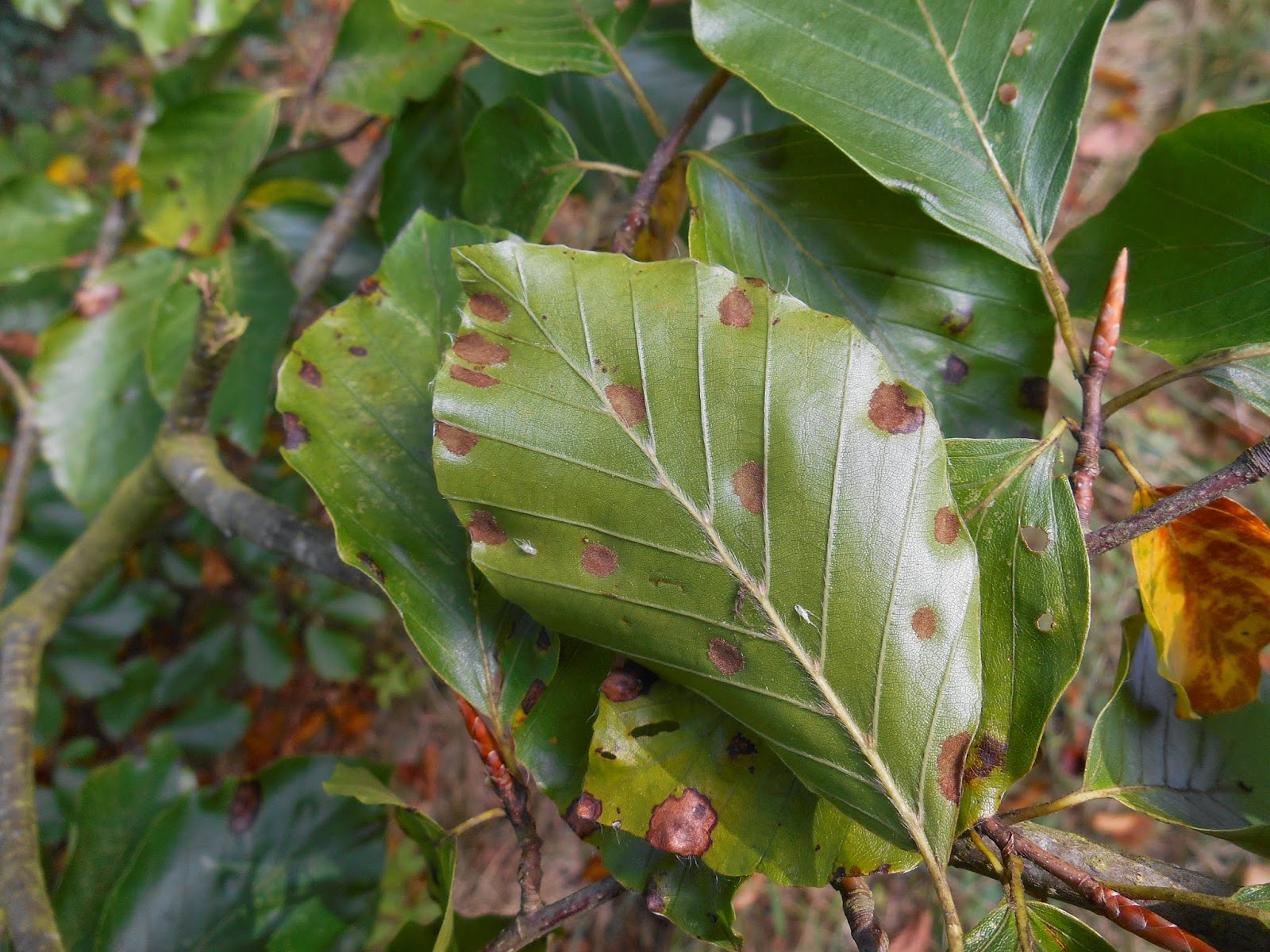 And there were corresponding brown patches on the under side.

Cherry leaves were colouring up, with a huge proportion of them bearing the mines of the very common micro-moth, Lyonetia clerkella.


Usually by late summer, the leaves of sycamore are disfigured by Acer Tar Spot, Rhytisma acerinum. The closely related Field Maple seems to be unaffected. I won't dwell on the details of this fungal infection as it has featured in a previous blog.


A closer view shows a distinct yellow ring bordering the spot. This is not always so obvious and it may be that there is some variability in this disease, or at least in the way it manifests itself.


I was able to make my way down to the verge of the A45 where Oxford Ragwort, Senecio squalidus, was in flower. This would normally attract lots of insects but, so close to the roaring traffic only a Marmalade Fly, Episyrphus balteatus, was present. This species, a hoverfly, is very common and sometimes present in quite astonishing numbers. This year seems to me to have been about average.


A tangle of bramble was there to trip the unwary. This plant can be quite a nuisance but nevertheless can often present interesting features. These tell-tale red-brown speckles are caused by a fungal pathogen, the Violet Blackberry Rust, Phragmidium violaceum.


The main fungal bodies are found on the underside of the leaf and consist of black pustules. It seems to have been unusually prevalent this year but has not noticeably affected the vigour of brambles.

Bramble, Rubus fruticosus, was only one of several shrub and small tree species in the area.


One of these was Snowberry, Symphoricarpos albus. This  hails from the western side of North America. Originally introduced as cover for game birds, this member of the Honeysuckle Family has become widely naturalised. 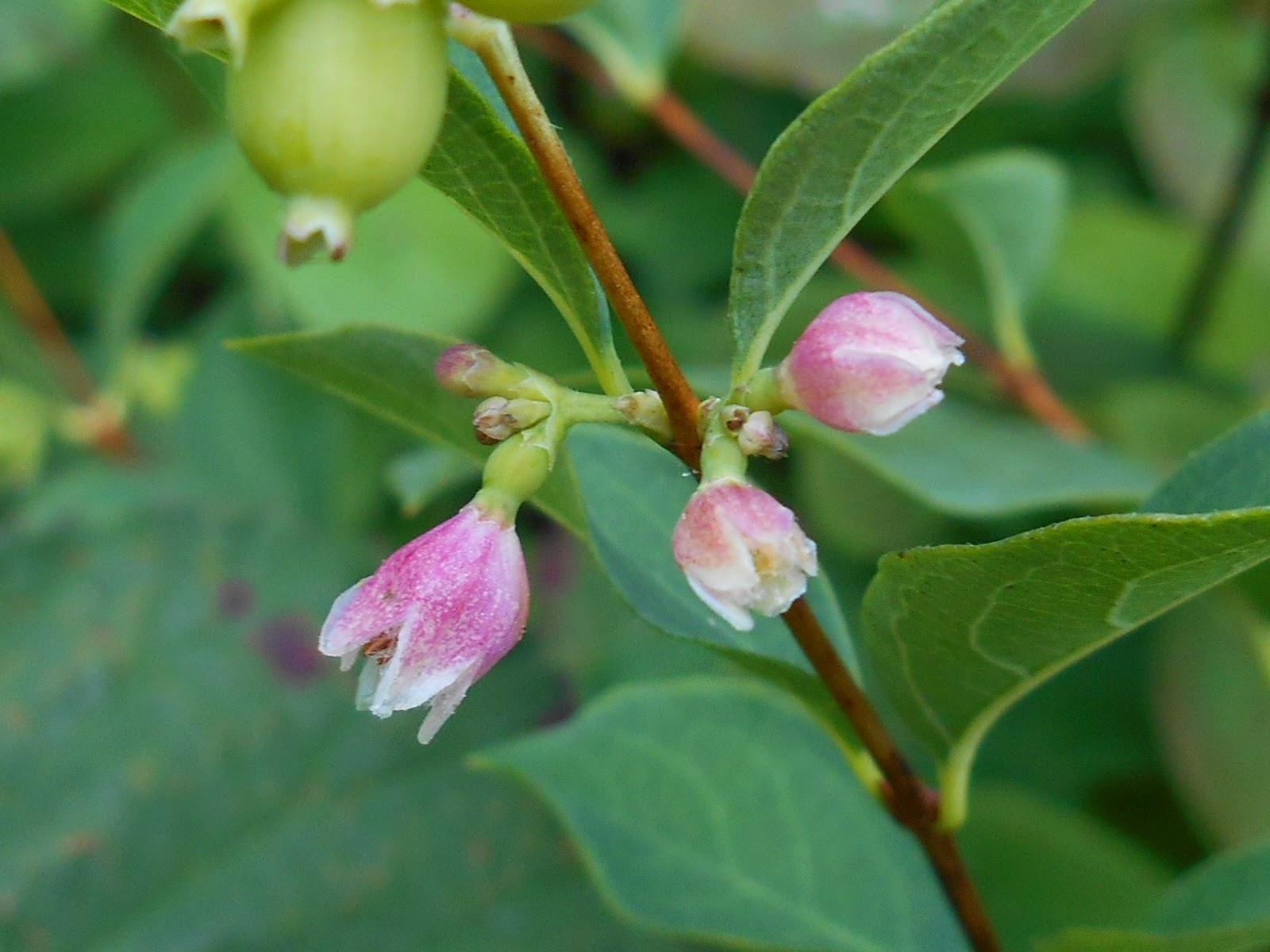 At first glance Snowberry seems to have little in common with the true Honeysuckles, Lonicera species, but on close examination the small pink flowers have a vague similarity. They are not very striking but are rich in nectar and extremely popular with bees.


I swept a hazel bush for insects but instead netted a hazel nut - very tasty it was too. A very swollen axillary bud was the work of another mite, this time Phytoptus avellanae. It is, as is to be expected, another common and widespread species. 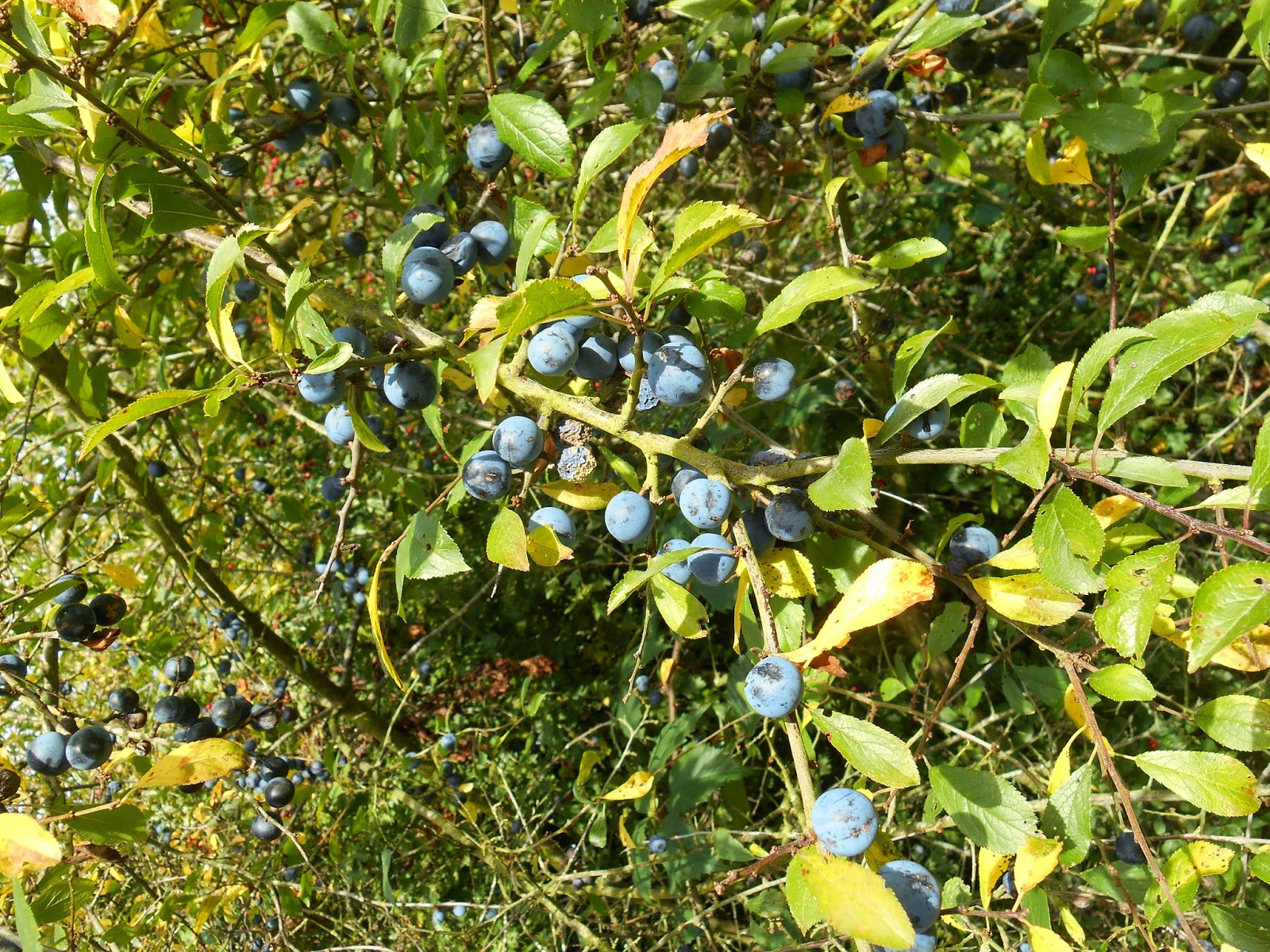 Blackthorn bushes were heavily laden with sloes in some places, but elsewhere there was little fruit to be seen. Strange!


I have tried your patience long enough and I'll excuse you from the other warts, mines, excrescences and general disfigurations noted on my walk. 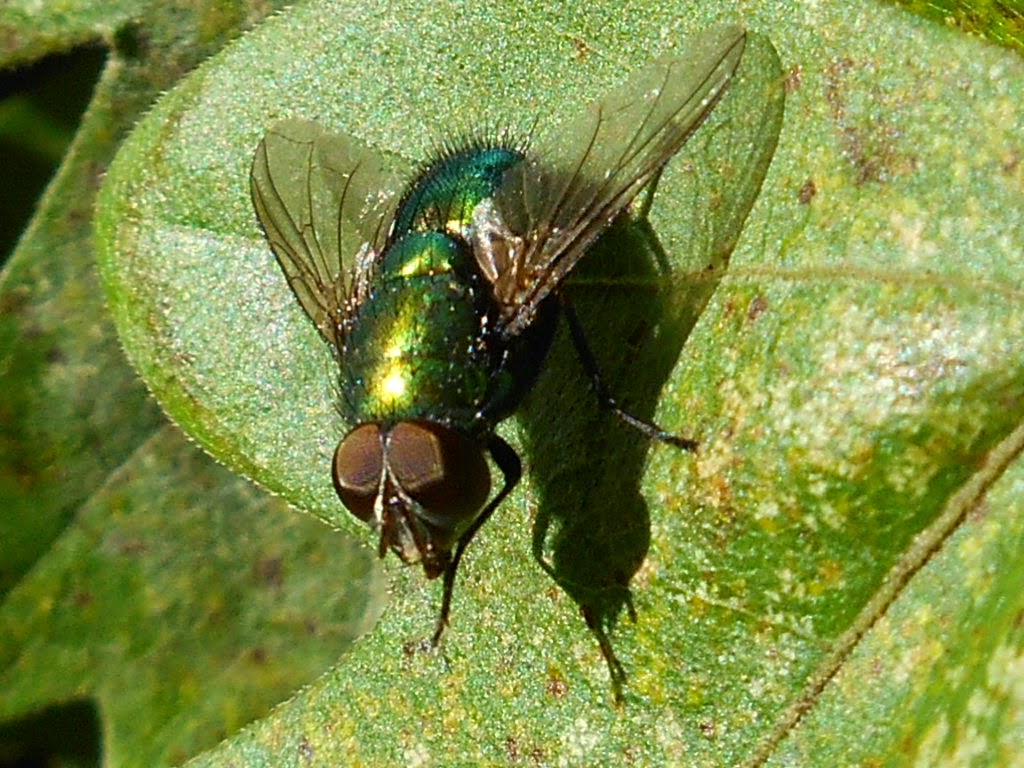 I had enjoyed sunshine for most of my walk and I left this male Neomyia cornicina also soaking up the warmth.  Gregor et al, "The Muscidae (Diptera) of Central Europe" describe this species as 'symbovile'  but my trawling of the internet has failed to find a definition of this word! I suspect the term is used to describe a species which is synanthropic (associated with humans) in some areas but not so elsewhere.


Can anyone out there help?