On 15th February I was walking along the base of the huge earthen retaining wall at Boddington Reservoir when I saw a Dandelion in flower. Nothing remarkable in that; Dandelions are known to everyone in Britain from early childhood not only for their golden flowers but their globular fruiting heads which we, as children, called clocks. The leaves and roots are edible but are diuretic - my grandmother called them "Wet-the-bed".(Its French name is 'pissenlit'.) 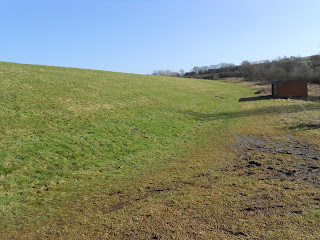 The fact that the plant was growing at the foot of this bank is probably not significant but Dandelions do seem to favour such a spot. John Clare wrote:

And Dandelions like suns will bloom
Aside some bank or hillock low.

As with many early Dandelions the plant
I found had a sessile inflorescence, i.e.
it was stemless. I have called it a Dandelion as
though this is a straightforward species, but this is far from true. Despite being visited by many "pollinating" insects, the actual seed is produced without fertilization and is therefore wholly female in origin. This arrangement, known as apomixis, has resulted in a huge number of "microspecies" existing, with about 230 being currently recognised in Britain.

The word dandelion is said to derive from the French dente de lion - 'lion's tooth' and refers to the plant's jagged leaves.

Incidentally, the earthen bank referred to earlier is home to a very fine colony of Cowslips. But that can wait for another blog.