Another fine day persuaded me to stretch my legs along the disused railway track bed which runs west from Byfield. This was the Stratford-upon-Avon and Midland Junction Railway - the SMJ - otherwise known as the Slow, Miserable and Jolty Railway.

﻿﻿﻿
﻿
﻿﻿﻿﻿
As my photograph shows, the track bed is still easily walkable over some stretches and provides easy access to Parson's Spinney. 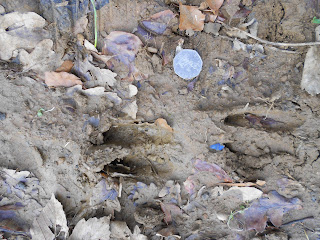 I found that I was following some deer tracks, the size and shape of the "slots" (50 pence coin for scale) showing that they were Fallow Deer. Like me, they were also making for Parson's Spinney. This is a rather attractive patch of wet woodland in which I have taken many Dolichopodid flies - known as "dollies" for short. The drier patches support several fine cherry trees, recognisable by the horizontal stripes on the bark. This species is Prunus avium, sometimes known as the Gean, and is a wonderful sight in late spring when, as A.E Housman wrote:

Loveliest of trees, the cherry now
Is hung with bloom along the bough.

I will doubtless be visiting this site several times over the coming months in search of insects. However, today only one fly was taken, Sylvicola fenestralis, known as the Window fly from the place where it is often seen - but here quite a long way from the nearest window.